SUV pinned between two trucks but the driver walks away 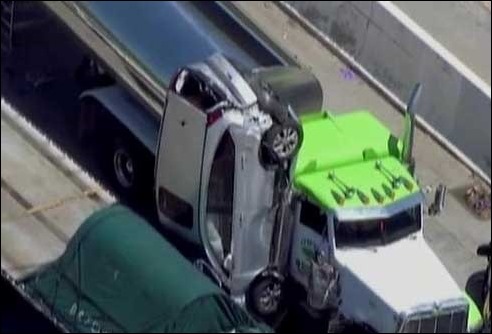 This is the kind of story that has has one appreciating the the focus on design and safety going into the cars and SUVs being built today. Amazing … the driver, David Grimes, walked away with only a slight burn from the SUV’s air bag.

A man’s SUV was pinned between two tractor-trailers, yet he miraculously walked away unharmed.

David Grimes was driving on Interstate 65 in Tennessee on Friday when he slowed down because of traffic. That’s when he said a tractor-trailer hit him. Seconds later, he was hanging by his seatbelt as his car was stuck vertically between the two trucks.

“I thought there was no way anybody could’ve walked away from that, but he did, and he’s OK,” his tearful wife, Melissa Grimes, said