Is Sheep Belching contributing to the climate warming problem? 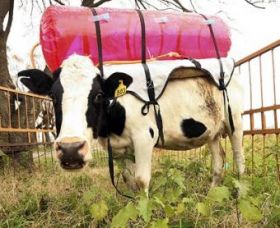 Just like the cow methane gas studies, an article in the Wall Street Journal had the same attention grabbing ability for me: Silencing the Lambs: Scientists Target Sheep Belching to Cut Methane. Nevertheless, researchers and policy makers at the United Nations believe that the livestock industries are a major contributor to climate change and that methane produced by grazing lifestock is responsible for more greenhouse gas emissions than cars.

The cynic in  me wonders just what the real political motivation is and has me wondering how long I have before I’ll see an added tax to  livestock products or restaurant meals.  I should apply for a grant to study Mexican food and methane gas! Who knows, maybe there will be a couple winners in this research — the makers of Bean0 or Maalox with Simethicone?

PALMERSTON NORTH, New Zealand — On a typical day, researchers in this college town coax hungry sheep into metal carts. They wheel the fluffy beasts into sealed chambers and feed them grass, then wait for them to burp.

The exercise is part of a global effort to keep sheep, deer, cows and other livestock from belching methane when they eat and regurgitate grass. Methane is among the most potent greenhouse gases, and researchers now believe livestock industries are a major contributor to climate change, responsible for more greenhouse-gas emissions than cars are, according to the United Nations.

Plenty of people, including farmers, think the problem of sheep burps is so much hot air. But governments are coming under pressure to put a cork in it, and many farmers fear that new livestock regulations could follow. They worry that environmentalists will someday persuade the U.S. Environmental Protection Agency to seek to tax bovine belches. Some activists are urging consumers to stop buying meat and thus slow climate change.

All of which is breathing new life into the study of sheep stomachs. Researchers have tried just about everything, from changing the animals’ diets to breeding new sheep they hope will be less gassy. They’ve concocted cocktails of clover, garlic and cottonseed oil to try to curb methane. They have even tried feeding the animals chloroform, which can stymie the production of gas if it doesn’t kill the animal.

“We’re at a very theoretical stage,” says Simone Hoskin, a livestock expert from Massey University, an institution involved in the research going on in this grassy New Zealand town. “A lot of people think we are insane.”

There was an earlier golden age of sheep stomach research — in the 1950s, ’60s and ’70s. In those days, governments were looking for ways to improve animal digestion so livestock could produce more food for a hungry planet.

But as worries over food supplies waned, research tailed off. Scientists, as it happened, weren’t all that thrilled about fishing around in animals’ stomachs, which can contain up to 150 pounds of mushy meadow grass. “The stuff smells in a way you can’t imagine,” Ms. Hoskin says. “It really stays on you.”

The root of the problem is that sheep, cows, goats and other so-called ruminants are unique in the way they digest their food. While that allows them to convert more energy from grasses, the process also generates hydrogen as a byproduct. Microbes known as methanogens convert the hydrogen to methane, which then leaves the animal through belching — and to a lesser extent, flatulence — and then floats into the atmosphere, where it helps to trap heat and potentially accelerate global warming. Humans emit methane, too, but not so much.

As awareness of the issue has grown, the U.S., U.K. and other countries have stepped up their research. But “there is no question that New Zealanders lead the world,” says John Wallace, a scientist at the Rowett Institute of Nutrition and Health at the University of Aberdeen in Scotland.

That’s partly because New Zealand prides itself on its environmental conscience. It is also, Kiwis say, from necessity: Their otherwise clean island is home to about 35 million sheep — nearly 10 times the human population — and millions of cows, deer and goats.

As a result, roughly 48% of New Zealand’s greenhouse gases come from agriculture, compared with less than 10% in such large, developed economies as the U.S. Agricultural leaders fear their livestock-heavy economy could be at risk if there’s an international move to tighten rules on animal emissions.

Kiwis tried to get a leg up on the problem in 2003, when politicians proposed an emissions tax on livestock. Farmers thought they were getting fleeced and attacked what they called a “fart tax.” The idea was tabled.

But livestock owners and scientists knew the issue wasn’t going away. With the help of industry groups such as Meat & Wool New Zealand, they put up millions of dollars to finance a war on sheep emissions.

The group, the Pastoral Greenhouse Gas Research Consortium, helped assemble eminent animal-stomach experts from around the world. They included Ms. Hoskin, who had spent much of her career working on such topics as the role of leafy turnips in deer grazing. It also included itinerant ruminant researchers from the U.K., Germany, Peru and Sri Lanka.

Much of the work occurs here in Palmerston North, a town north of Wellington surrounded by rolling hills and filled with some of the most sophisticated animal-emissions gizmos in the world. Chief among them: 10 “respiration chambers,” which scientists use to measure burps under different experimental conditions.

Pumps circulate fresh air into the chambers. Researchers rustle up an animal — often a sheep — from behind a laboratory, and then wheel it into the chamber, where the bleating creature munches on grass. The concentration of methane in the air then usually increases. The cud chewer is oblivious.

“They love it here,” says Cesar Pinares-Patino, a Peruvian scientist who helps run the chambers. The animals “can look at each other and be comfortable.” Sometimes they stay in the chambers for days, he says.

The boxes help show what strategies are working. But scientists haven’t achieved a breakthrough. Many of the dietary additives known to reduce methane — cottonseed oil, for instance — don’t work well in the long run; sometimes they cost too much or the animals don’t digest them well. Chloroform additives worked for a while, but the animals’ stomachs adapted and started emitting again.

Researchers are particularly proud of one achievement, though: Using genome sequencing to draw a genetic map of one of the leading methanogens. Team members passed around a single-malt whisky when they finished that work in June. They say the breakthrough should make it easier to identify compounds that can attack the methanogens so methane isn’t made in the first place.

“We now know our enemy,” says Peter Janssen, a scientist who worked in Germany and Australia before returning to his native New Zealand two years ago to do livestock emissions research.

Some farmers elsewhere in the world are bemused. “I applaud them” for trying, says Eric Davis, a cattleman whose operation in Bruneau, Idaho, has more than a thousand head of cattle, and hence plenty of gas. But “I’m skeptical they’ll come up with anything we can practically use,” he says. Besides, “I still have a problem with whether methane is a problem.”

Mr. Janssen admits his work would probably be “fringe science” if it weren’t for all the interest in climate change. But he still thinks it will generate something useful.

“It could be two years, or it could be 20” before a solution to animal burps is found, he says. But someday, “it will suddenly show up. And then you will have it.”

Write to Patrick Barta at patrick.barta@wsj.com