Simple iPhone cursor features unknown for years by many users 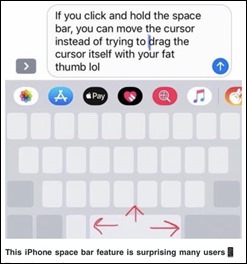 This really should have been yesterday’s Tech Friday post, but between the holiday with turkey, family and football watching on Thursday and another market drop and oil plunge of another 7.7% to $50.42 on Friday my focus was elsewhere.

A three-year-old iPhone function which was apparently largely unknown to many has gone viral on social media – and it could change the way you text.

Despite being available on iPhones for the last three years, the keyboard feature has recently been discovered by thousands of Apple users – after Krissy Brierre-Davis shared her ‘discovery’ on Twitter.