How far left will Democrats go as they campaign for president? 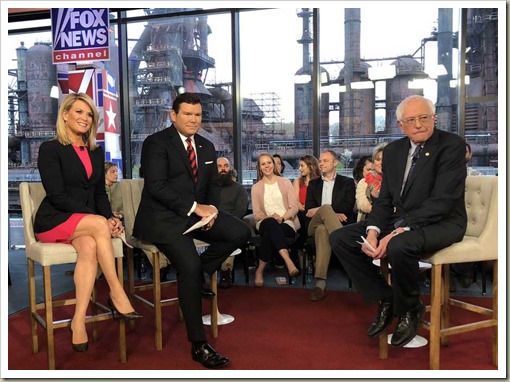 It was a struggle to contain my frustration as I watched Senator Bernie Sanders pitch his version of Democratic Socialism to a “townhall” Q & A hosted by Bret Baier and Martha MacCallum of Fox News on Monday night. I “SO” hope that the American people have far more commonsense than to head further down a path that has failed in every country it has ever been tried. On the contrary, for all the challenges we have with our  system that embraces free markets and capitalism, it has demonstrated success in lifting the quality of life for all – it is what attracts millions from

everywhere else to come to America. Let’s not lose that risk-reward motivation and competitive edge.

I keep looking and listening for a simple sound bite that will make sense people from all backgrounds. Below is a paraphrased comment from Art Laffer (of Laffer curve theory) when discussing overly punitive progressive taxes and taxes on wealth. He commented that “the more earnings and wealth government takes from achievers, the more it deters them from working harder and taking risks. The more government provides and gives to workers, the less motivated they are to take risk, achieve and work harder.”

Competitive markets work and capitalism naturally advances a society, where socialism and a heavy reliance on government provided services reduces competition, improvement and innovation … and almost always proves to be the least efficient provider of goods and services. If America’s current system is leaving too many people behind, let’s improve our free-market , incentive based system and not go to a punitive based government controlled system. Competitive markets,  risk – reward and capitalism work … and is the only economic system proven to improve the quality of life for all willing to participate.

Although this post is serious … I can’t help but to include a little lighthearted political humor, the way it once was done between those with different political philosophies. Democrats have always enjoy jabbing Republicans and Republicans back at Democrats … but all voters chastise the politicians in Washington DC who create a system that benefits them, while making the rest of us pay the taxes and do the work.