How does marriage impact the taxes you pay?

Does Your State Have a Marriage Tax Penalty?

It isn’t always easy to decipher the tax impact of marriage on taxes, but the Tax Foundation summarized the tax code “marriage penalty” and offers an overview map. YMMV. 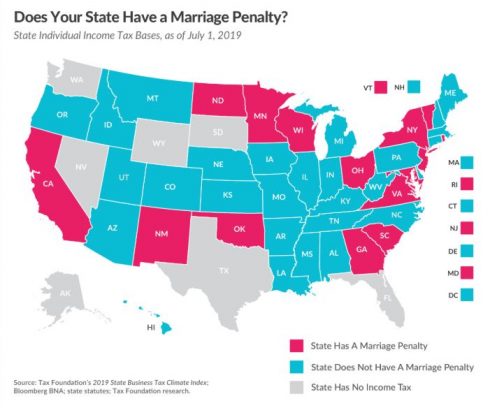 Under a progressive, graduated-rate income tax system, tax rates increase as a taxpayer’s marginal income increases. A marriage penalty exists when a state’s income brackets for married taxpayers filing jointly are less than double the bracket widths that apply to single filers. In other words, married couples who file jointly under this scenario face a higher effective tax rate than they would if they filed as two single individuals with the same amount of combined income.