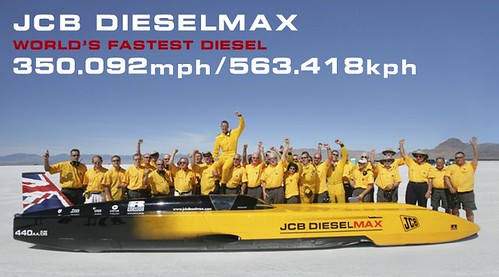 They did it! Another extreme diesel follows the footsteps this past year of the Dakar VW Touareg TDIs, Audi’s LeManns V-10, the Darpa Diesel VW Touareg named Stanley. This time it was the JCB DieselMAX team from the UK and they came to the Bonneville Salt Flats of America to race their twin engined ‘diesel’ speedster recording a 350.092mph combined run.

After dawn cracked Utah the morning sky, Andy Green recorded a first run of 365.779mph (558.664kph) and a second of 335.695mph (540.248kph) to clock the combine run of 350mph (563.418kph). The crew achieved the goal they set of 350mph and were able to show off just what a diesel powerplant is capable of. An interesting note from Green that most diesel drivers can relate too: “There is so much more to come as the car is pulling like a train and we still havenâ€™t used sixth gear!”

JCB DieselMax was JCB Chairman Sir Anthony Bamford’s baby. He desired to demostrate the performance the company’s JCB444 capabilities. These are the engines which normally power backhoe loaders and Loadall telescopic handlers. (see previous post one and two)