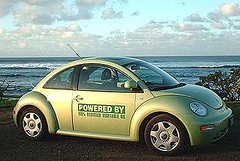 While on vacation I did keep my eyes on alternative fuel ‘happenings’ in Hawaii. (to the embarrassment of my family) Not many locals were aware of anything except that gasoline was about a buck more per gallon than on the mainland. The Maui rental fleet of VWs (Bio-Beetle.com) were not spotted, although we were not spending every minute searching either.
🙂

There was an article in the paper that indicated that politicians and the public are aware of the biofuels. They held a ‘summit’ to determine what could be done to accelerate Hawaii’s growth in both use and industrial production. (see Star Bulletin)

Incentives and fast permits urged to foster biofuels
Public and private leaders discuss how to build the local industry — By B.J. Reyes – bjreyes@starbulletin.com

Creating incentives for the production of biofuels in Hawaii and streamlining the permitting process for facilities that would manufacture such fuels were two priorities identified by a conference of top private and government leaders.

“You have the key people here who would be involved in the formulation of this industry,” Gov. Linda Lingle said after seeing how participants rated the importance of various issues related to establishing a biofuels industry.

Biofuels are products like ethanol and biodiesel that can be made from agricultural crops such as corn, soy beans, sugar and their byproducts to displace traditional fossil fuels.

“There is a key piece missing at this point and that’s the consumers — they will come in these next months leading up to the legislative session,” Lingle added. “Today was really about those who would be involved in creating the private capital to actually get these projects going, the people that would purchase the biofuels and the landowners who would have to be devoting large parts of their land for agricultural production in order to have a local biofuels industry.”

A public meeting on the state’s energy strategy is scheduled for 9 a.m. Sept. 29 at the state Capitol.

One recurring point at the summit was the need to keep the momentum going for developing not only biofuels, but other forms of alternative energy in the state.

Hawaii relies on imported fossil fuels for about 90 percent of its energy needs.

“This (summit) is very valuable in that it helps to show where there is convergence and show where there is a very high level of thought on these areas of agreement,” state Sen. J. Kalani English, chairman of the Senate Energy Committee, said during a break in the session.

Participants spent about two hours discussing areas of concern before voting on which issues should take priority in decision-making by public policy makers and leaders in the private sector.

Two recurring themes were the need to establish incentives to promote in-state production of biofuels and crops for conversion, as well as the need to streamline the permitting process for building conversion plants.

“It resonates very well, I think, with all of us,” English said. “I know that from a policy level, from the legislative side, those are things we can work on.”

As part of legislation passed this year, counties were asked to come up with guidelines for streamlining the permitting process at the county level.

Priority also was placed on investing in research and development in crop-to-fuel conversion technology, investing in infrastructure to distribute alternative fuels, and creating incentives for investment in agriculture infrastructure.

“You could see there was a lot of similarity in what people felt were the most important steps to take,” Lingle said. “Many of them included speeding up the permitting process and state tax credits of some kind.”