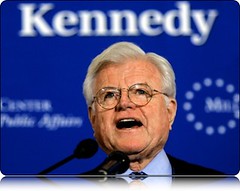 Senator Ted Kennedy, the “liberal lion” of the Senate as he has been described, passed away at the age of 77 after a a battle with brain cancer in his home. He was an icon for many favoring liberal politics in the U.S. and served the state of Massachusetts for 9 terms after being elected in 1962 to fill the seat of his brother President John F. Kennedy. His tenure in the Senate placed him as the second in seniority behind West Virginia’s Senator Robert Byrd.

Although I did not admire Kennedy’s personal life or his politics, my respects go out to his family and many years of service to our country. His stature and strong voice will leave a void for many that see his accomplishments out weighing his flaws. RIP Senator Ted Kennedy (February 22, 1932 – August 25, 2009).