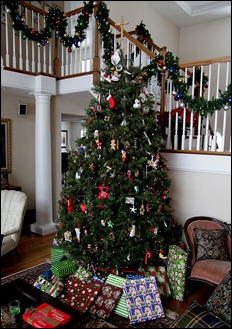 I’m a Christian and make an effort to keep “Christ in Christmas” … but I do my best to be sensitive to other religions going out of my way to send Hanukkah cards to my Jewish friends and ease off offending those that I know have strong objections to the Christian faith and our desire to share the gospel. Most others that I call friends do the same  … but at the same time we do practice evangelism as instructed by Jesus: “Go into all the world and preach the gospel to every creature” (Matthew 28:19-20, Mark 16:15-16 and Luke 24:47). I do desire to be an effective ‘Ambassador for Christ’ (2 Corinthians 5:20).

Still there exists a battle over this season and holiday. There are those who continue to disagree or even acknowledge the holiday named Christmas in public and at work. This is usually done with the intent of eliminating the religious tie to a national December holiday – these voices focus especially in government, schools, and public places.

In my lifetime this seems to have start from the Christian side of the argument. There were those who saw Christmas becoming too commercial and tied to Santa Claus, gift giving and materialism. Churches and conservative Christians saw celebrating Christmas in this way as moving away from the “reason for the season” – the birth of Jesus. I can remember Christians objecting to the utilizing of the Greek letter “chi,” “X,” representing “Christ,” in the popular shortened form of Christmas as “Xmas.”

Where are we heading as secular views stressing separated Church and State attempt to make inroads against an 80% Christian country — I’m unsure, but both side have pick up their sabers in the past few decades. A couple years ago issues came to a head over merchants and stores instructing their clerks and employees to say “Happy Holidays” rather than “Merry Christmas.” This inflamed conservative talk show hosts (and many Christians) who rallied by boycotting (or at least threatening) stores opting for less Christmas greetings and more politically correct “Holidays” policies. On the other side, “the American Civil Liberties Union and Americans United for Separation of Church and State pushed the other direction declaring that government-funded displays of Christmas imagery and traditions violate the U.S. constitution—specifically the First Amendment, which prohibits the establishment by Congress of a national religion. The battle over whether religious displays should be placed within public schools, courthouses and other government buildings, has been heated.”

Thankfully this year seems for the most part to be a bit calmer in the battle over Christmas. Those who want to wish other 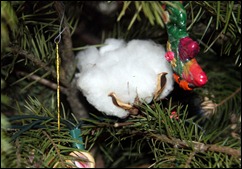 Merry Christmas seem to be free to do it, and store which a few years ago leaned a way from playing any religious themed music has gone back to including it on their intercom and “music on hold” phone trees. Speaking of “trees,” that an entirely different subject that has been in the news this 2010 season. I’ll let other attempt to solve the “Which is greener: Real cut Christmas trees or artificial?” (for us it is always a “real” tree – photo right is a cotton boll sent by a southern friend that gets put on our tree every year. Tradition – a favorite part of celebrating Christmas.)

Although I’m unsure of the accuracy of a book written by history professor Steven Nissenbaum (The Battle for Christmas), I did find a few interesting “holiday” traditions that have been incorporated into today’s Christmas celebrations that were not associated with Christmas. Some preceded the birth of Jesus and other were tied to the winter solstice. Symbols and behaviors such as caroling, decorated trees, mistletoe, holly wreaths and yule logs were said to have pre-Christian tradition.

For me, I tend to avoid the politically correct terms and practices anyway (I don’t like to be told what to do, call me independent) … and rarely opt for a “Happy Holidays” over a “Merry Christmas”  … so to all who read my blog, here’s wishing you all a very Merry Christmas and a very happy and healthy New Year!

Our 2010 Corbett Family Christmas Letter in PDF for those interested 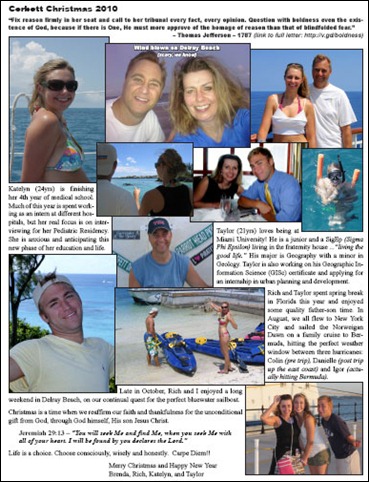