Astronauts may soon be eating goo from their poo

It’s a long way to Mars and there’s "not a drop to drink" (author Mindy McGinnis) or "plop to eat" on the way … so what’s the plan?

Since astronauts are already recycling their urine into drinkable water, the next step should be obvious: "Goo made from their Poo." (in observing the current lab conditions at Penn State below, I’m not sure who is being asked to taste it? YUCK!) 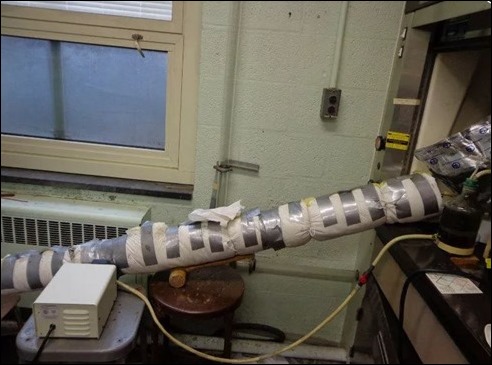 Penn State researchers developed a system that combines microbes with human waste to help create food. Geosciences professor Christopher House describes the resulting substance as "a little bit like Marmite or Vegemite where you’re eating a smear of ‘microbial goo.’"

Astronauts on board the International Space Station already recycle urine into drinkable water, so it’s not a stretch to imagine turning solid waste into something useful (and edible) as well. Currently, ISS poop is discharged to go burn up in Earth’s atmosphere.

The researchers’ cylindrical test system exposes the waste to microbes, which break it down through anaerobic digestion, a process often used to treat municipal waste here on Earth. The researchers conducted their tests with artificial solid and liquid waste substitutes, so they didn’t have to inconvenience any actual astronauts.

"What was novel about our work was taking the nutrients out of that stream and intentionally putting them into a microbial reactor to grow food," House says. The team used methane produced from the process to grow the microbe Methylococcus capsulatus, which is used in animal feed and offers a good mixture of protein and fat.

The team also experimented with growing other kinds of microbes and tested the system at high heat as a way to destroy potentially dangerous pathogens.

A NASA grant helped fund the research. The space agency is looking for creative solutions for sustaining astronauts on an eventual human mission to Mars.