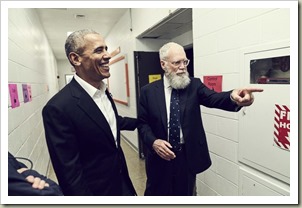 likeability our previous president exhibited – reminiscent of why he was elected in 2008 (Letterman, not so much).

Obama was baited numerous times by David Letterman to weigh in negatively on President Trump, but didn’t bite. He remains likeable as a person and even as a president … although his political philosophy and policies differ from most of us who prefer lower taxes and a small and less intrusive federal government. Where I definitely differed from David Letterman (and there were many areas) in his interview comments, was when he closed with "I’ve always respected the office of the president, but you were the only person I respected as president" [paraphrased]. Hm? Am I alone in seeing the "good" in all who have served as POTUS even when I disagree with their political philosophy and decisions in challenging times? To me, those who have served as president ALL patriotically desire to protect, defend and keep the United States a great country and "personally" are caring and compassionate people.