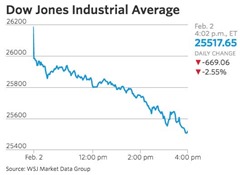 I played the “high risk, high reward” game on Friday while watching most if not all stocks collapsed over rising interest rate concerns. It looks more likely that the Federal Reserve may have to be more aggressive in raising rates in order to control inflationary pressures after the jobs report. Unemployment is low, the economy strong and about every business sign is pointing to good times ahead — perhaps that in itself is a worry?

The U.S. economy added a better-than-expected 200,000 jobs in January, the Labor Department said. The unemployment rate held steady at 4.1%, its lowest level since December 2000.

The early morning selling continued right  into the close on Friday and few seemed to be willing to buy and hold over the weekend … especially as the well telegraphed news of #thememo (PDF) was released to the public. Few analysis tied the concern regarding the obvious anti-Trump political bias and abuse of power at the top level of the FBI to the market sell-off, but I’m sure most traders were paying attention to the news.

Since I recently sold a few stock positions that had run up for no other reason than I was concerned the gains were too fast, I did end up buying back in once again. For the record, I’m back owning Ford ($F). Who knows if buying shares at $10.66 is a near term bottom, but after their recent “miss” and selloff, I’m hoping the negativity was already priced in prior to the panic selling today? It seems to me that at a time consumers are spending, have more money in their paychecks to spend due to tax cuts, having near full employment and those pressures forcing wages to rise (although only slightly) … Ford should at least sell a few cars. We’ll see.