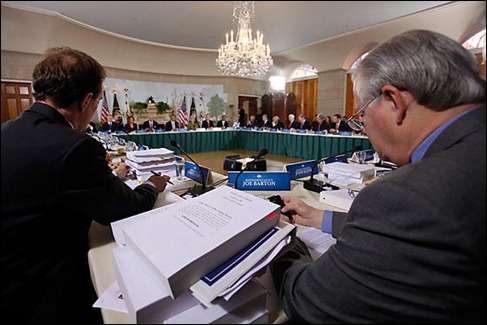 I tuned the XMRadio into bits and pieces of President Obama’s 7 hour Health Care Summit with congressional leaders at the Blair House yesterday and came away tired of hearing the same thing I’ve heard all year. It was carried live on CSPAN and picked up in whole or part by many of the cable news outlets for the best part of the day. I expected a dog and pony show and from reviews most of the talking heads, there was little to change my thoughts. On the other hand, I would like to think that there was a modicum of sincere dialog that could be interpreted as caring about doing what is best for the electorate, but in the end, I detected more self, or perhaps political party, bloviating.

What I did see was a true philosophical difference between how the Democrats would like to grow government and gain more centralized control over another segment of our country. The Republicans fro their part, were clear to express there desire to be a bit more hands-off. For their part in today’s meeting, the GOP worked to derail the existing legislation and would like to start reform fresh and piece by piece.

Conclusion: We’re no closer to health care reform or to secure the financial well being of our nation than before the summit … but it made for an interesting civics lesson.