Trying out Google’s latest music beta. So far, so good.

Thanks to Google+ friend Paul Young, I had a chance to play with Google’s new Music beta on Monday. I can’t say that I’m a must have music listener (I’m not),

but I do enjoy listening to tunes once in a while. I’m partial to Pandora but have enjoyed Spotify and do listen to several Internet radio stations on occasion. Since I have SiriusXM in the car, my couple of favorite stations are saved in the preset buttons, the “loaded” audio pretty much fulfill most of my listening desires … although I wouldn’t mind a buffer that could save a couple hours of each of my preset station even when my car was off! (let me know if there is such a radio head as I might be interested)

I ripped most of my CDs to the computer. But in the old days it was challenging to keep all the different devices working together – Apple loved loves keeping everything in-house. At the time (and currently), my favorite device is the original iPod Shuffle even though it is somewhat limited; I’m waiting for a “cloud connected Shuffle’” version … but suspect when there is one, it will only work with Apple’s iCloud. Nevertheless, having everything digitally archived on all my devices was never a priority and when online streamed music arrived I pretty much stopped keeping up.

My conclusion so far is that Google has succeeded in providing another way to stream and archive music as well as help suggest music that might appeal to one’s taste. I’m not sure its anything better than others have developed, but they do have the resources and staying power to compete if not eventually dominate in this area.

Let me know if you are interested in trying the beta (email) … I have a few invites left. 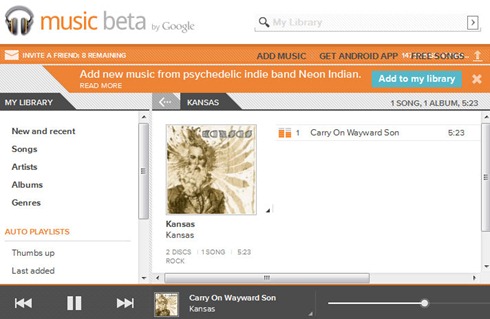