With the electoral college, what does a popular poll mean?

I’m not sure I would put a lot of faith in polling this year, especially following 2008 which saw a turnout unique in our recent history. 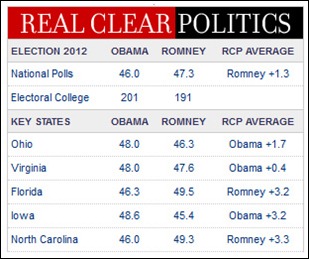 Who knows if the motivation and base for either party will vote in the same numbers … and who knows if it even matters with the electoral college vote?

Most analysts are pointing to the electoral college as the key and the importance of just handful of states. Being in Ohio does mean that our votes are critical in the national presidential election and a strong turnout might have local implications as well.

For now, it looks as if the debates and “Benghazigate” situation have given the Romney/Ryan ticket a bit of a boost over Obama/Biden.

As of late last week, 12 states were in the tossup column.

That’s where the candidates will spend most of their time…