The future is bright for science and super capacitors too 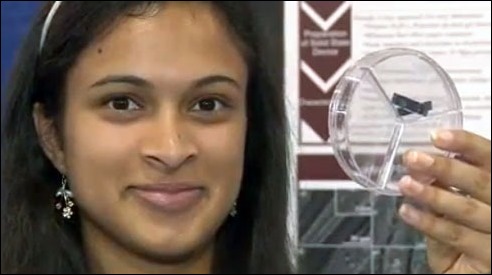 I love reading stories about bright young inventors exploring the world of science and remember with fondness the days of science fair projects. One that recently caught my eye was a scholarship winner from California who worked with super capacitors and is finding ways to improve electrical energy storage devices (as well as charging and discharging them). LINK and video clip below

The future is bright so long as we have a next generation like Eesha Khare.

What Khare has designed and created is a supercapacitor with a “special nanostructure” allowing it to store significantly more energy while charging incredibly quickly. It also remains viable for 10,000 charges compared to the more typical 1,000 charges of today’s batteries.

Her experiment used the supercapacitor to power an LED, but both Khare and Intel believe the same tech can be used to similar effect on a smartphone. There’s also potential uses for car batteries, too, which could make electric cars more viable if their recharge time can be cut to a few minutes or even seconds.