Gov Scott Walker is appealing as a national GOP candidate

CNBC interviewed Gov. Scott Walker on Thursday morning (video below) as America is beginning to talk and take note of him as he makes the media rounds. 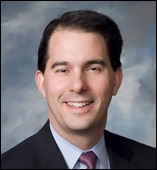 It is early, but for Walker getting a little better better name recognition is a way to keep dollars growing for a potential (and likely) campaign run to become the GOP presidential nominee.

The biggest surprise to those belittling him is just how savvy and likeable Gov Walker is as a candidate. The criticism that he didn’t finish his state college education and left in his senior year to start work for the Red Cross may actually be his biggest strength when it comes to gaining support from working class America – at least for those who pay attention to Mike Rowe. “How are those  Ivy League educated president doing lately?” The last couple haven’t exactly left a positive impression, especially for those still suffering through never ending wars, a recession, a flood of illegals keeping wages low and a “supposed rebound”  and a new Obamacare law that has disproportionally hurt the middle class.

Heading into Iowa (the first primary), the polling has conservatives of that state showing a healthy respect for Walker’s record as the governor of Wisconsin. Most Republicans admire his tenacity in facing the strong union challenges and by sticking to his principles during previous elections … and the recall attempts. As the GOP field starts to narrow,

it would be great to see the fresh face of an experience executive espousing conservative principles and leading rather than a politician pandering to and pitting one group against the other? For once it would be rewarding to elect a president with policies that would actually help beleaguered working Americans, rather than advocating for income redistribution schemes or electing based on political legacy and name recognition like either a Clinton or a Bush (no offense Jeb).

It’s time to change the status quo in Washington DC … and I like what I’m hearing and seeing from Scott Walker.

Part 2 on a "Scott Walker For President" candidacy.

Video was removed from CNBC