A terrifying day for those invested in the financial markets 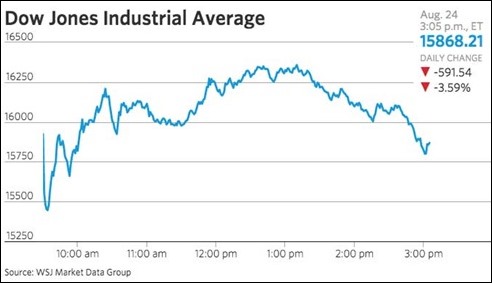 The trading day is not over yet, but the moves on Wall Street and with individual stocks or indices have been unprecedented today. We are currently down 600 points on the Dow Jones Industrial average with an hour left in the day, but that almost seems mild compared to the onslaught of sell ordering in the early morning. At 9:30 when the opening bell rang, the DJIA plummeted 1089 points marking it all time largest move. It was a hair off the NYSE 7% halt trigger, but the impact to portfolios was huge. Those holding stocks of nearly any kind felt the pain.

Those of us brave enough to make a few trades were rewarded as markets rose off the floor and even went positive with a few stock before the selling in the afternoon resumed. Who knows what the end of the day or when the end of this sell off will end?

Those who remember October 1987 are seeing some similarities, but commonsense is all that is needed to realized that the stock market has risen but the economy is not equally as robust. The economy and financial health of banks, companies, housing and individuals is far better than before the 2008 recession, but no where near the pace to justify the market return since that time.