Setting up the Raspberry Pi as a security monitor 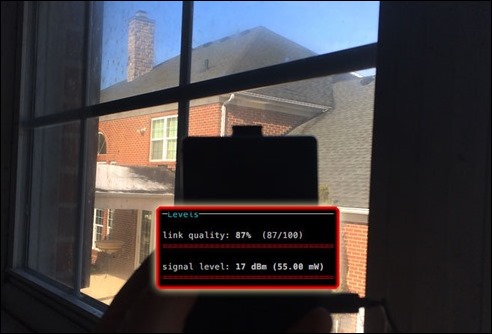 We’ve had a professional security system in the house for years, but I’ve always thought it would be nice to make a homemade version for the detached

garage/pool house – might be a perfect Raspberry Pi project?

The first step was to see just what kind of wifi signal was there, considering the tiny $10 USB wifi dongle — obviously not much of an antenna (little nub at top of the device in the photo above).

Next was to boot up out in the garage and run the Wavemon program from the Linux command line and check the link quality and signal level (readout in photo above) while walking around on my extension cord leash. A useable connection in most areas toward the front; not so good in the area back near the workbench, woodstove or pool pump equipment room … but that’s okay since I’m probably going to use a Pi camera module mounted up high in the front window anyway. I’ll plan on pointing the lens at the driveway and if that works, I might try the Pi Noir infrared camera pointing at the inside of my garage shop for night monitoring (although would probably need to make a multiplexer or add a second Raspberry Pi unless one of the cameras is set up using a USB port … not to mention some infra-red LEDs for illumnation? Better get the first camera working)

Anyway … it looks like I’ll have enough bandwidth to be able to access the Raspberry Pi and camera feed from my network and even be able to monitor in real time … sort of like the uStream.tv Gazbo cam I set up several years ago.