Food for thought with all the political labeling nowadays

Obviously labeling someone as a “fascist, socialist or an authoritarian dictator” is not new in politics, but the bigger government grows, the more we U.S. voters need to defend America’s founding principles such as individual liberty and personal freedom.

During the 2016 campaign and election of President Donald Trump, those on the political left were quick to point out Trump’s authoritarian CEO leadership style as concerning. As someone who is NOT left-leaning at all, I understood their “concern,” … but still trusted our co-equal branches were structured in a way that they would keep dominate presidents in check. The extreme left went so far as to refer to Trump as Fascist and equated him to Hitler and his administration of reminiscent of 1930s Germany –– and they were serious. Perhaps we all need to know more about Giovanni Gentile?

In the same vein, those of us who believe a smaller and less intrusive government provides the best environment that lifts all boats (some more than others), see the breed of Democrats embracing socialism as concerning. 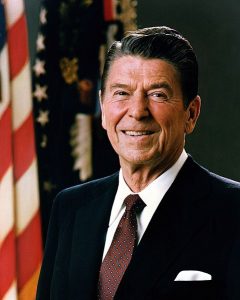 Their open and outspoken anger towards competitive market-driven America gets my dander up.  It is shocking to see people supporting not only higher taxes and more government regulation of business, as we’ve seen with liberal and progressive Democrats for the last century, but the socialist Democrats have no problem with government taking over more private business and without any evidence that U.S. government-run entities, or any socialist country in the world, are capable of improving quality and efficiency in any area they want government to run.

The whole political philosophical discussion has me wondering if our mindset has a lot to do with the era in which we grew up? For example, my politics likely came of age during the 1980s and watching the once Democrat share his enlightenment as to the reason he adopted Republican philosophies. President Ronald Reagan definitely made far more sense to me that what I was seeing coming from the Democrats of the day … and after seeing this short clip shared by Dinesh D’Souza saying, ONCE AGAIN FROM THE GIPPER GETS IT RIGHT DEPT: “If fascism ever comes to America, it will come in the name of liberalism.” –Ronald Reagan