Winter in Black and White captured with Treo 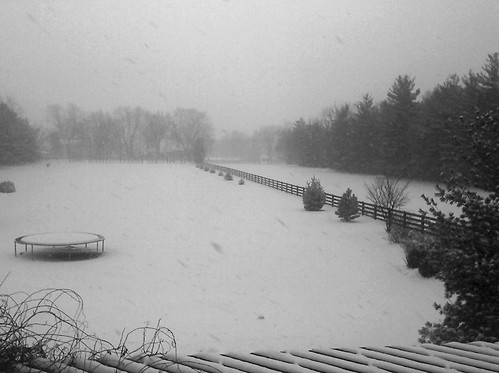 Here in the mid-west we’ve been cold for about a week and there is little sign that winter is abating. (photo above is a black and white from my Palm Treo 700p smartphone) The snow has started in earnest and has curtailed my trip from Cincinnati to Cleveland this week. Notwithstanding, technology is keeping me connected and offers me little excuse to play hooky from work … FYI: my son is crossing his fingers that school will be cancelled tomorrow. I sent him out this afternoon to get a head start on shoveling the walks and as I supervise from the warm side of the window (smiling), I notice he is spending more time playing in snow than shoveling it … so much for getting a head start?
🙂

Too much news to comment on today, so I’ll just re-post a ‘fish story’ that I found interesting and save the ‘traffic signal post’ for tonight … aka: tomorrow’s post.

FORT MYERS BEACH, Fla. â€” A crew of two fishermen was stranded 100 miles off Florida’s coast after a pack of bull sharks that had been following the shrimping boat for days smashed a hole into the ship’s hull and broke its propeller.

A group of sharks had been slamming into the Christy Nichole’s hull for four days, Captain Roger Schmall said. But then a 14-foot bull shark broke the boat’s tail shaft, leaving Schmall and his crew of two adrift about 100 miles off the coast. It eventually sank last week.

Schmall had seen the sharks trailing him for days, he told the News-Press newspaper.

A 14-foot long bull shark cracked through the shrimping boat’s tail shaft and broke the ship’s propeller, leaving him and his crew of two to drift 100 miles off coast.

“It’s pretty scary when you’re sitting there and you got all that water coming in,” Schmall told the News-Press.

Schmall radioed for help, and another vessel picked the crew up about two hours later.

After being rescued this time, Schmall remained aboard his ship to pump water out while the other boat pulled it back to land. He says it was working for a couple of hours, but the waves eventually took their toll on Schmall’s boat and the boat sank.

Sadly, this wasn’t Schmall’s first run-in with the sharks.

Once, in Freeport, Texas, Schmall’s dog jumped in the Gulf after the shrimpers dumped the extras. The dog was caught in the feeding frenzy and never came up again.

Sharks are a common sight for shrimpers, Schmall said.

“That’s where they get their food, when we throw our trash over,” Schmall said, referring to unwanted critters caught in the netting.

“Now, they’re so ferocious, they travel in such big packs,” Schmall told the News-Press.

He has no idea what he’ll do next. He’s considering leaving the shrimping industry altogether.

The Associated Press contributed to this story.