I’ve been enjoying using Twitter after a brief learning curve trying to figuring out how to get my head around the concept of following 140 character text messages (TweetDeck is my favorite client on a computer). Surprisingly it can be somewhat addictive even for someone who is a not hyper-stimulated video gaming kind of guy. That said, I’m starting to notice the burnout phase kicking in for early adopters and am wondering just how long this phenomenon will last.  A couple issues besides the 140 character message limits that begins to wear on one is the abuse of the hashtag (# followed by tag) when users include several of them and the spam tweets that start to sift into the stream of monitored chatter.

An interesting ABC interview is taking place over lunch with George Stephanopoulos, @GStephanopoulos, interviewing Senator John McCain, @SenJohnMcCain, exclusively on Twitter. It will be interesting to see how the question and answer session goes and if this trend will continue? Here are the first few exchanges I’ve grouped on TweetDeck. 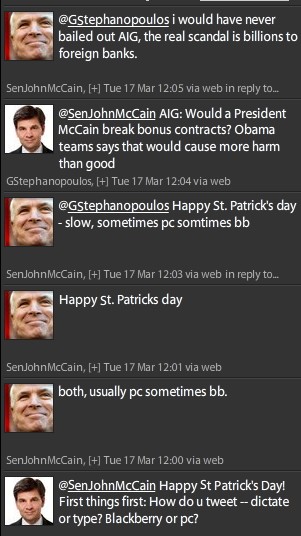