According to Sherri Wells, a leading expert on SMS messaging, the “SMS (Short Message Service) was developed in 1985 by a collaborated effort between Germany and France and was created by Friedhelm Hillebrand, Bernard Ghillebaert, and Oculy Silaban .” Ms. Wells also states that the first practical message was “Happy Christmas” and was sent in on December 3, 1992 over the Vodafone GSM network in the United Kingdom. Neil Papworth of Sema Group used a personal computer to message Richard Jarvis of Vodafone.

In those early years, carriers were slow to implement the short 160 character messages as they looked for ways to monetized the service. The per message charges deterred those already paying significant charges for 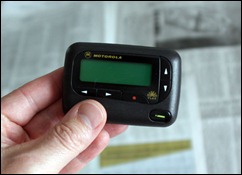 mobile devices as carriers’ systems slowly matured. Today SMS text messaging has grown exponentially and the volume is now above 1.5 trillion messages annually, in the just the United States! “Over the full-year 2009, worldwide text messaging generated in excess of $150 billion and that figure is forecast to reach $233 billion by the end of 2014.”

My earliest encounter with SMS was with “text messaging pagers” (photo was my last text pager). A good friend of mine wrote a software program in the early 1990s called ePage which was used by dispatching services as a way to delivery more than a ‘beep’ to a device (aka: Beeper or Pager). Prior to receiving “text,” a subscriber or company employee would call-in to retrieve the message, many without the convenience of a cellphone.  My “unpaid” role was to test the service through Pagenet in Ohio from my friend in Florida. Thinking back, one forgets that other methods of written communication were slow by comparison; we either connected by slow dial-up modems directly and chatted through costly long distance or pay a per-minute fee to a service like Compuserve in order to send email messages – sending a text message to a Motorola text pager to a persons belt anywhere in the coverage area was impressive … and all for the cost of a text message.