Will we see any significant fiscal reform in 2011? 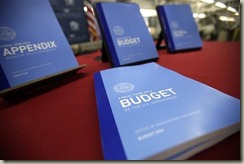 Now that President Obama has delivered his 2012 budget, many conclude (even the President’s own Fiscal Commission), that there is a lack of leadership coming from the Whitehouse in dealing with America’s compounding debt. Obviously the problem isn’t going to go away without some control over how much money the US government spends and borrows, and the longer we wait, the more challenging the problem becomes for all of us.

The President must provide the leadership to create an environment in which it is possible to begin serious negotiations about the tough but fiscally responsible choices that will be necessary.

Ultimately only the President can provide the necessary leadership to get something done, and it will be up to elected officials to make the tough choices to reach an agreement …

The President’s “punting” the ball to congress doesn’t give me all much confidence either, despite the strong words coming from a few fiscally conservative hawks. Although I’m heartened to hear Rep. Paul Ryan speak boldly, I’m concerned when it comes to cutting popular programs that many will attempt to push the growing issues to the next congress. Unless public pressure grows and demands balancing the federal budget, I’m doubtful we’ll see the real entitlement changes made … at least cuts deep enough (or taxes raised enough) to address budget deficits. One can only imagine how difficult it will be to unite individual senators and house representative members in order to address their pet-projects and those benefiting even the out of favor targets such as Planned Parenthood, NPR, PBS, the billions of foreign aid, the IRS and the EPA … let alone eliminating programs and jobs entirely — such as postal employees and the billions of taxpayer dollars to provide healthcare for federal workers and their double-dipped pensions.

Those cuts will be easy compared to those needed to be made in defense and the entitlements as baby-boomers tap into Social Security and Medicare. As for leadership from the President, we’re seeing exactly the opposite. More spending for quirky projects that may not even be profitable – high speed rail – and his pet project Obamacare, the entirely new unfunded Healthcare Law. Call me Mr. Negativity, but unless the President leads the overhaul and stops growing government, it is going to be near impossible for members of congress to agree on how to make these hard choices. Maybe a government shutdown is in order until some hard choices are made? (including some video with Rep Paul Ryan 2/15/2011 below)