Why is President Obama following me? 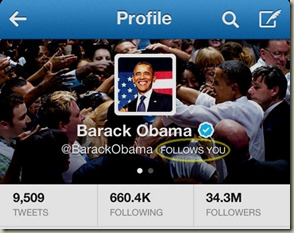 Hmm, I’m not really sure what to think of this? I’m sure those who supported President Barrack Obama’s campaign don’t mind being followed by his twitter account, but for me it is probably an indication that the IRS or Department of Justice is next.

For those of you who are not socially connected, the President’s staff to sends most of his personal Twitter posts, but they say those with a “-bo” indicates it was sent personally. I don’t pay much attention, but was surprised to see that he follows RichC.