S.W.E.A.T. — Mike Rowe has ideas that needs to be heard

Uncommon brilliance from a voice “for” the common man … that would be Mike Rowe. His answer to a reader Facebook post from earlier this month is worth reading.

Interesting conversation over on the wall. It was started by a guy called Jayson LaVictorie, who has posted a few thousand words about what’s wrong with America. He started with these observations, inspired apparently by my S.W.E.A.T. Pledge.

Jayson: “The 12 points are stupid. Corporate SHILLS don’t want you to think (critically) of how the average worker of the United States are getting screwed over by the ultra rich! They don’t want you to know that you are losing your jobs to people that are working for nothing or next to nothing! Why do they get freebies on Labor Costs, and Corporate Welfare, then bitch if the average American has to rely on Welfare? The Hypocrisy is overwhelming when it comes to the free market thought, which no one seems to follow! The free market has no room for corporate welfare!”

Like many today, you seem to believe the poor are poor because the rich are rich. I do not share that view, not because I’m a corporate shill, but because I don’t find your arguments to be very persuasive. Name calling aside, I do not believe that I’m “shilling” for a corporation when I espouse the virtues of hard work and self-reliance. In fact, I don’t understand how anyone could argue with a straight face that such qualities should not be encouraged.

To be clear – I believe the world is a fundamentally unfair place. From what I’ve seen, it’s filled with people of unequal talents, unequal intelligence, unequal looks, unequal empathy, unequal luck, and unequal senses of humor. Some will agonize over the unfairness of all this inequity, and others will rise above their circumstances, no matter how grim. Personally, I prefer the latter group to the former. That does not mean I tolerate injustice or cruelty. I find those those qualities equally contemptible in corporations and individuals alike. But I don’t run a foundation designed to eliminate Corporate Welfare. My goals are to elevate the basic notion that hard work and personal responsibility are simple choices that we must all either reject or embrace as individuals. I believe this to be a simple truth, regardless of your race, gender, or tax-bracket.

That’s what the S.W.E.A.T. Pledge is all about. It’s not an attack on the poor or a defense of the rich – it’s an attempt to magnify the power that comes from never seeing yourself as a victim of circumstance. If you see that as a threat to your own worldview, cheer up. We live in a society where you have the freedom to rant and rave and call me all the names you wish.

Jayson: "I can’t find the original Face Book page I saw it on. Anyways, I remember reading it and thinking oh, great the guy from Dirty Jobs has a great idea on how to bring jobs back to this country. I clicked on to the posting and then I get this 12 points list. What a let down. It pretty much blames you and only you on why there are only a few jobs for everyone to scramble to get, and feed their family with."

First of all, I realize it’s disappointing to be told that you are responsible for your own happiness, but if you need comfort Jayson, look around – you’ll find it everywhere. The country is full of programs and organizations that reflect your belief that other people are responsible for whatever difficulties you might face in life. Personally, I find that philosophy to be the opposite of empowering.

Secondly, I didn’t write The SWEAT Pledge to create jobs – I wrote it because we currently have nearly four million available jobs that for whatever reason, people don’t seem to want. I talk with evil CEO’s every week who are looking to hire people that are willing to learn a truly useful trade. I assure you Jayson, the jobs are there. Maybe they’re not your idea of a dream job. Some require retraining and long hours. Others require relocating and hard work. But the jobs are real, and the opportunities to advance far better than most people realize. My scholarship fund was designed to encourage and reward people who are willing to get the necessary training to do those jobs. The SWEAT Pledge is there to differentiate mikeroweWORKS scholarships from those programs that only reward scholastic achievement, athleticism, talent, or need. I wish to reward something different. I wish to reward work ethic. That’s what I’m trying to encourage. If you believe that’s stupid, I guess I’ll just have to find a way to live with your opinion.

Jayson: "A free market economy is a market-based economy where prices for goods and services are set freely by the forces of supply and demand and are allowed to reach their point of equilibrium without intervention by government policy, and it typically entails support for highly competitive markets and private ownership of productive enterprises."

And where exactly, do you suppose this “free market” exists? Cleveland? Dallas? Los Angeles? Please. The economy is GLOBAL, Jayson. We compete with China, Germany, South Korea, and about 200 other countries that don’t give a damn about your definition of a market economy circa 1950. Wake up, man. You’re worried about corporate welfare? Fine. Me too. But do you understand that these corporations are competing with corporations in other countries that set their tariffs and trade policies and currency valuations and working standards with absolutely no concern for ours? You can blame the corporate welfare all day long, and rage against injustice and hypocrisy till you’re hoarse. But if you really want to see manufacturing return to this country, you might want to reserve some invective for the American consumer, who has made it crystal clear that the origin of a widget no longer matters. And you might want to think about what it’s going to take to fill four million jobs currently available. I humbly suggest the answer will involve the kind of work ethic embodied in my stupid Pledge.

Also – speaking of free markets, let me explain what’s happening with The mikeroweWORKS Scholarship Fund. I sell SWEAT Pledges (and all sorts of other stuff) to raise money for said fund. I also shake money out of evil corporations. Then, I then give that money away every to a particular type of person. So far, we’ve awarded millions. But – to be absolutely clear – we discriminate. And we do so without apology. Not regarding gender, or color, or weight, or looks, or intelligence, or star sign. We discriminate with respect to your willingness to work hard and learn a useful skill. I’d rather reward the right attitude, then subsidize the cost of a chip on the shoulder. To those people who have refused to sign the Pledge, I say "fine. No harm, no foul. Go find another, less discriminating b-list celebrity with a pile of money to give away. Or, better yet – go start your own Scholarship Fund, and administer the funds in whatever way you see fit."

And that’s what I’ll say to you – with respect. Seriously – why not form The Jayson LaVictorie College Fund? You could raise your own money from like-minded friends, and then write your own Pledge – one that absolves the applicant from any measure of personal responsibility. Think about it. A simple creed that helps you identify those special Americans who believe their best opportunity for success in life lies firmly in the hands of the government, the kindness of strangers, the generosity of their parents, or the munificence of the village. Anyone but the individual themselves.
Of course, if you go that way – you better have a robust endowment. You’ll have applicants lined up for miles…

PS. The current scholarship finalists have been narrowed down to 50. Their videos are due this week. http://profoundlydisconnected.com/foundation/
I’ll keep you all posted on how this round shakes out. So far, the essays have been shockingly good.

PPS. If you want to buy a SWEAT Pledge, you can get one here –http://profoundlydisconnected.com/shop/
They’re $10. Proceeds go to the mikeroweWORKS Foundation.

PPPS Jayson – say the word, and I’ll send you one for free. A treat from your favorite Corporate Shill! Either way, good luck to you. 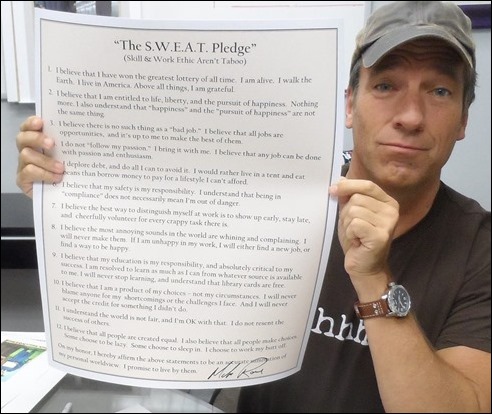 Follow Mike Rowe on Facebook … and “maybe” we rally to get him appointed or elected where his ideas can make an even bigger impact … I can’t imagine his “uncommon sense” will do much worse.