A great photo that gives meaning to whales being gentle giants 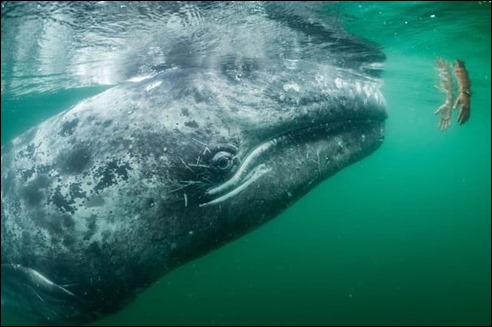 California Gray Whale watching is on most ocean lovers "want to do list" but few have up close and personal opportunities like this. Part of me wants whales to "fear" humans and keep their distance (for their own protections and survival), where another part of me loves seeing the bond between mammals and knowing the sensitivity helps make us "want" to protect whales from commercial whaling operations for little economic gain.

Humans and killer whales (orcas) are the adult gray whale’s only predators Aboriginal hunters, including those on Vancouver Island and the Makah in Washington, have hunted gray whales.

Gray whales have been granted protection from commercial hunting by the International Whaling Commission (IWC) since 1949, and are no longer hunted on a large scale. Limited hunting of gray whales has continued since that time.

Western gray whales are facing, the large-scale offshore oil and gas development programs near their summer feeding ground, as well as fatal net entrapments off Japan during migration, which pose significant threats to the future survival of the population.[31] The substantial nearshore industrialization and shipping congestion throughout the migratory corridors of the western gray whale population represent potential threats by increasing the likelihood of exposure to ship strikes, chemical pollution, and general disturbance.