Music Monday: Falling back on a favorite from Jackson Browne 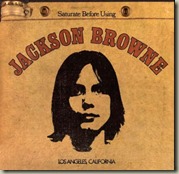 Once I started listening to music and heard Jackson Browne in the 1970s … I was hooked and have not really stopped enjoying his songs and his long spanning music career.

So, after a rainy weekend, here’s a little pick-me-up song for Music Monday from side A (cut 4 ) of Jackson Browne‘s 1972 first album called Jackson Browne (often mistakenly referred to as “Saturate Before Using” due to the words on the album jacket) … Doctor, My Eyes.