Our country has seen some tough times — times that have united and times that divided our nation and its people. In recalling old history lessons, its seems there’s usually an event or a trigger which brings about one or the other. Today, on the eighth anniversary of 9/11 … our nation is once again divided and we struggle to find something to unite us. 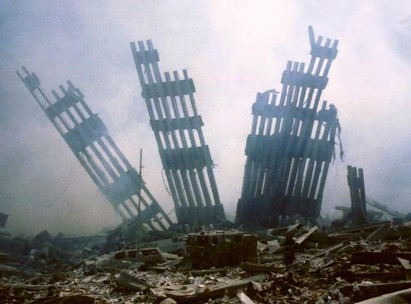 Personally speaking, it felt good to be ‘one united nation’ for a short time against an evil enemy … one as vile most of us can personally remember. Eight years ago, it was uplifting to see patriotism back in the forefront (perhaps Vietnam memories exist for me) and to see our entire nation rally besides those who lost so much on 9/11/2001. Few in the world stood in our way when our very righteous nation focused on eliminating those using terror — Osama bin Laden and Al Qaeda.

Unfortunately a few years, a long war, divisive politics and a deep recession has mellowed our memories of uniting behind a common goal, and perhaps even our desire to fight those who still seek to harm our country and its people. Why do we forget so quickly and leave ourselves vulnerable to another attack? Why are those who plotted still free, and those who desire to repeat the same atrocities permitted to wreak havoc in other countries?

Thankfully, we have memorialized those who lost their lives or their loved ones on 9/11 with Patriot Day, and for at least one day refocus our energy; I’m also proud to have a President, who after being charged with protecting our country, recognizes the threats that still face our country. I’m not one to overly compliment President Obama, but am respectful of his care and concern for the security of our country — for that I’m thankful. Personally speaking, I have been relieved to see how President Obama has filled the shoes of Commander in Chief … except for the recent CIA re-probe by the administration (I don’t get that?)

As for domestic matters, I’m troubled over the progressive direction of our nation seemingly focused on squelching free-enterprise, capitalism and competition. The invasion by government into our personal freedoms, liberties and our country’s businesses is disconcerting. Besides the massive debt spending in picking winners and losers in the private sector our government seems to be on their way in taking over the health care and insurance industries. I have respect for those who see what they are doing as just and acceptable when they acknowledge what they desire and are doing, but have distaste (to use a mild term) for those who seek to deceive the American people in order to forward their political philosophy … particularly President Obama while using the bully pulpit. I can’t understand how one of our brightest Presidents has chosen the art of deception in order to  move his progressive agenda forward?  In his elegant speech on Wednesday night, his claims were wildly optimistic as far as how we would pay for his ‘non-existent’ health care plan, and certainly didn’t represent the leading bill being proposed by those in his own party. His adversarial accusation toward those members in congress and the media choosing to highlight the hidden objectives and pages of confusing and convoluted verbiage in the current House bill were far from presidential. This must be obvious to all?

Contradictions worthy of the Marx Brothers.

The thing about the bully pulpit is that Presidents can make the most fantastic claims and it takes days to sort the reality from the myths. So as a public service, let’s try to navigate the, er, remarkable Medicare discussion that President Obama delivered on Wednesday. It isn’t easy.

Mr. Obama began by depicting a crisis in the entitlement state, noting that “our health-care system is placing an unsustainable burden on taxpayers,” especially Medicare. Unless we find a way to cauterize this fiscal hemorrhage, “we will eventually be spending more on Medicare than every other government program combined. Put simply, our health-care program is our deficit problem. Nothing else even comes close.”

On this score he’s right. Medicare’s unfunded liability—the gap between revenues and promised benefits—is currently some $37 trillion over the next 75 years. Yet the President uses this insolvency as an argument to justify the creation of another health-care entitlement, this time for most everyone under age 65. It’s like a variation on the old Marx Brothers routine: “The soup is terrible and the portions are too small.”

As astonishing, Mr. Obama claimed he can finance universal health care without adding “one dime to the deficit, now or in the future, period,” in large part by pumping money out of Medicare. The $880 billion Senate plan he all but blessed this week would cut Medicare by as much as $500 billion, mainly by cutting what Mr. Obama called “waste and abuse.” Perhaps this is related to the “waste and abuse” that Congresses of both parties have targeted dozens of times without ever cutting it.

Apparently this time Mr. Obama means it, though he said this doesn’t mean seniors should listen to “demagoguery and distortion” about Medicare cuts. That’s because Medicare is a “sacred trust,” and the President swore to “ensure that you—America’s seniors—get the benefits you’ve been promised.”

So no cuts, for anyone—except, that is, for the 24% of senior beneficiaries who are enrolled in the Medicare Advantage program, which Democrats want to slash by $177 billion or more because it is run by private companies. Mr. Obama called that money “unwarranted subsidies in Medicare that go to insurance companies—subsidies that do everything to pad their profits but don’t improve the care of seniors.”

In fact, Advantage does provide better care, which is one reason that enrollment has doubled since 2003. It’s true that the program could be better designed, with more competitive bidding and quality bonuses. But Advantage’s private insurers today provide the kind of care that Mr. Obama said he would mandate that private insurers provide for the nonelderly—”to cover, with no extra charge, routine checkups and preventative care.”

Advantage plans have excelled at filling in the gaps of the a la carte medicine of traditional Medicare, contracting with doctors and hospitals to coordinate care and improve quality and covering items such as vision, hearing and management of chronic illness. If seniors in Advantage lose this coverage because of the 14% or 15% budget cut that Mr. Obama favors, well, that’s “waste and abuse.” [my comment: I wonder if the Congressional Health Care plan will be sliced and dice the same way? I’ll bet not.]

Mr. Obama did also promise to create “an independent commission of doctors and medical experts charged with identifying more waste in the years ahead.” That kind of board is precisely what has many of the elderly worried about government rationing of treatment: As ever-more health costs are financed by taxpayers, something will eventually have to give on care the way it has in every other state-run system.

But Mr. Obama told seniors not to pay attention to “those scary stories about how your benefits will be cut, especially since some of the folks who are spreading these tall tales have fought against Medicare in the past and just this year supported a budget that would essentially have turned Medicare into a privatized voucher program.”

This is a partisan swipe at one of the best GOP ideas to rationalize the federal budget, despite Mr. Obama’s accusations that his opponents want to do “nothing.” This reform would get Medicare out of the business of spending one out of five U.S. health dollars, and instead give the money directly to seniors to buy insurance to encourage them to be more conscious of cost and value within a limited budget. Democrats would rather have seniors dance to decisions made by his unelected “commission of doctors and medical experts.”

Mr. Obama also called for “civility” in debate even as he calls the arguments of his critics “lies.” So in the spirit of civility, we won’t accuse the President of lying about Medicare. We’ll just say his claims bear little relation to anything true.