I’ve waited a few weeks in order to fairly judge the NetTalk phone service and it’s associated smallish hardware device which promises “Unlimited Local and Long Distance Calling in the US and Canada.” 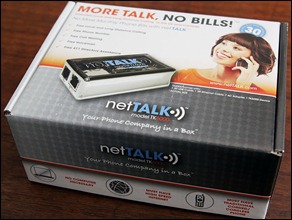 The VOIP service is similar to other marketed services and devices that transform broadband Internet connections into something that resembles traditional landline telephone service.

Another phone line is not something we really needed, but as a gadget loving guy, I couldn’t resist the idea of paying $99.95 once and eliminated phone bills forever. A couple years ago we gave up our two line “Bell” phone service and opted for a packaged digital cable, single number phone and broadband with Time Warner. The service has been great for making unlimited LD calls in the U.S. and always provided a high quality call to all of our wireless extensions. I ported over my existing fax number for this and blocked the outbound ID so as not to receive too many voice calls on the dedicated fax number. Really we haven’t had a need for any further phone service since cell phones handle most everything else … but I’m always looking to eliminate a monthly bill.

Years ago, prior to the change in both the per minute cost of cellphones and landland phones, I also set up Skype to operate as a means of communicating by voice. In the early days, Skype offered beta testers a cheap annual “SkypeOut” service which 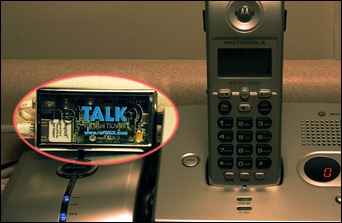 offered unlimited calling to phone numbers for less than $20/year. It worked well and was convenient and since I was already using Skype for computer to computer connections was easy for me to adopt for business calls. Call quality wasn’t always great, but the cost when there wasn’t unlimited nationwide long distance was easy on the budget. Current Skype user seem to appreciate it because they need want videophone calling. I’ve yet to embrace the video feature in my Skype calls, but looking at friends cruising on sailboats a world away from their kids and grandchildren, I know it is appreciated.

Nowadays unlimited phone calling has come to cell and landlines for the most part, and it was easy for me to give up the SkypeOut “pay for” service; I now just use it for computer to computer connections and the occasional toll-free call. A big plus is that I also port the calls to our home phones so if I’m not on the computer I can receive my Skype calls on our phones. It’s particularly handy when making calls home when I’m traveling and using Skype via wifi connections at a hotspot or hotel.

As for the new NetTalk box and service, it offers more from the hardware point of view than their competitor MagicJack. The small box can be connected either to an Ethernet port on a broadband

connected router or a USB port of a computer, like the MagicJack device. The beauty of connecting straight to the router is that a computer does not need to be running in order for phones to ring or calls to be made. This is far more functional than to have a computer up and running 24/7. Unfortunately this might all be for naught unless the actual phone service improves … which it has already over the past 3 weeks – firmware update.  One of the complaints was that the device would “go to sleep” and phones wouldn’t ring or be able to call out without unplugging and re-plugging the box in again. After the update, it has been solid and all calls in and out have worked appropriately (I don’t know if MagicJack or others have this issue). Also … there are times when the service seems slow to make a connection. For example, after dialing there is an abnormally long lag between touchtoning the final digit and a ring on the other end … almost enough that one might hang up and try again. Perhaps too many calls are being routed through the NetTalk servers?

A few more disadvantages might be not being able to port over a local phone number (yet) and picking from a list of odd area code numbers. I’ve yet to figure out the included VM (although I have an answering machine in the house) and dislike the multiple steps for speed dialing (dialtone, 0*, wait for message then speeddial number then # key).

A plus is the web-based control interface with billing setup for overseas credits and call history tracking – it is easy to use. All in all, I can recommend the NetTalk device as a secondary phone line; it is not ready to take over primary phone line duties, in my opinion. If you can live with the weaknesses and want to shed one more monthly bill, then give the $99.95 “currently lifetime” (3/2010) unlimited service NetTalk device a try. (of course they need to stay in business)
😉