As the self-appoint nation’s problem solver [that’s worth a chuckle], I’ve been

thinking about our underfunded Medicare and soon to be underfunded Social Security programs. For those needing a little primer, I will start by regurgitating some background information on these two taxpayer supported entitlements. Both Social Security and Medicare are supported by working citizens through payroll taxes. Eventually most of us will see a return on our contributions when we retire so as long as the programs continue. Many receive much more than they contributed during their retirement years, a few less than their contributions and about 15% received benefits (or their families will) due to a disability or early death. What is withheld from pay for Social Security is not placed in an account with a contributor’s name on it, but is instead used to pay the current recipients and then any additional is then deposited into a trust (opponents of Social Security (click for video) occasionally refer to this as similar to a Ponzi scheme). Medicare is health insurance provided to persons aged 65 and over and is used to pay for the medical care, but the program cost is much less predictable than with Social Security. Both both programs WILL need to be reformed (graphic below), but Medicare much soon since it is running deficits.

In my opinion, problems with the underfunded Social Security program is easily solvable with a combination of realistic changes, so as long as our nation keeps its economy chugging and manages its debt (of course depending on your perspective, that could be a big IF). Medicare on the other hand, is not going to be as easy due to unpredictable variables related 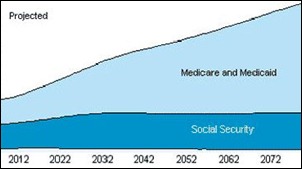 to rapid changes in medicine and the costs associated with health care advances. It isn’t realistic to ignore improved care or the obvious cost associated with enabling people to live longer and healthier lives. Who among us isn’t going to seek or want the latest treatment for their health care, the majority of it coming when in our later years (over 65). Unlike actuarial tables that are able to project life expectance fairly accurately and the near certainty of Social Security payouts, predicting Medicare cost 30, 40 or more years into the future is far more challenging.

Where the money comes from …

First, self-employed individuals pay 15.3% of their income directly to FICA (Social Security) and Medicare as “withholding taxes” in order to support these two federal programs. If you are working for an employer, the amount paid is  split between your share of 6.2% for Social Security and 1.45% Medicare and an equal amount paid by your employer. These amounts change only when income levels rise and currently (2013) for Social Security a persons plus company pays 12.4% 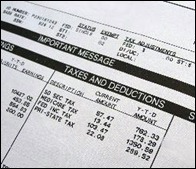 on all income under $113,700. (managing these programs cost  about 1% of the total taxes collected, which is considered efficient, by government standards – [cough, cough]). Tax changes in year 2013, also added new taxes which affect the top earners by taxing them an additional .9% on incomes over certain thresholds based on their filing status … for the good or bad, it is a way to add a few more dollars to Medicare.

When it comes to collecting from Social Security and Medicare, it is pretty obvious that when most retirees were younger SS and Medicare tax bites were lower (as for many, so was income). The amount they are now receiving is far and above the amount they were require to pay in during the good ol’ days. Their elders passed away younger, disease took many earlier in life and medical care was far less advanced. Fifty years ago, life expectance was substantially lower than it is now. Still, the Social Security component is fairly easy to calculate IF adjustment are made now for shortfalls in the future. There isn’t a free lunch, so we’re all going to need to pay more or receive less in order to keep the system going, but once past the boomer generation, the Social Security outlay curve flattens off and future generations “should” be reasonably stable unless life expectancy rises dramatically. 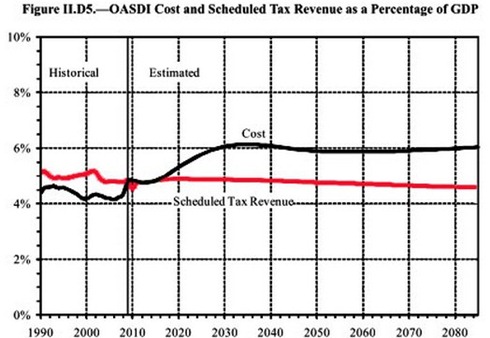 This realistic and easy to understand adjustment in the Social Security rates, retirement age or benefit payouts is not necessarily the same for Medicare. Unlike Social Security where dollar amounts can be calculated based on life expectancy, Medicare has seen cost and care changes that are nearly impossible to predict. Will cloned organs or robotic become standard practice. Will extremely expensive drugs advance preventing life threatening disease?

My thoughts are that if the Medicare system is to continue, we will need to fund it … efficiencies and cost cutting alone is not going to dent the shortfall. Of the current two schools of thought on how to fund and continue to support Medicare, 1) the Medicare tax will have to continue to rise to cover the longer lifespans and higher costs or 2) people will need to contribute to their own “lifetime health savings accounts” (LHSAs) in order to cover more of their personal Medicare costs. My guess is that we’ll face a combination of the 3 points above … cost cutting, increases in withholding and personal LHSAs requiring some personal accountability for one’s own care.

Can the above be done? Doubtful it will come from politicians in Washington DC. Eventually “we the people” will have to want change bad enough … or face enough dire situations triggering the necessity to change. There isn’t a magic wand.