With oil prices down and the stock market in rally mode (particularly these top 5 Nasdaq stocks), it might be 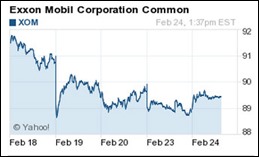 time to nibble on a few of TheStreet Ratings best Oil and Gas companies (below).

I’ve been watching a few of the “big oil” companies figuring it was time to start building a more diversified core dividend portfolio and Warren Buffett’s selling his $3.7 Billion investment in Exxon (XOM) opened the door to a sale price on XOM, one of the “better than a bank” 3% dividend stocks … but I suspect continued low oil prices will keep downward pressure on the stock. Yes there is risk, but holding a consistent dividend payer while waiting for oil to rebound is something I can comfortably go to sleep with. 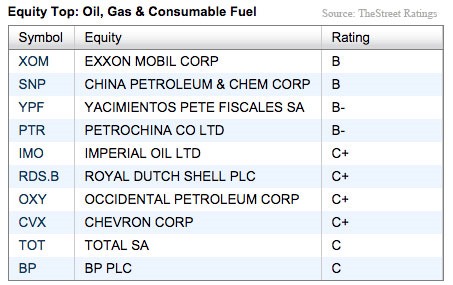 Oil has been shattered over the past several months. Bulls and bears are steadfast in their beliefs on where oil goes next. It would be impossible for both sides to be right … right? Actually, that’s not true. Of course, it’s nearly impossible to time the market with pinpoint accuracy, but if you take a macro and logical view to today’s current picture, then it shouldn’t be all that difficult to figure out.

The United States is still suffering from an uninspired consumer, and many people believe that low interest rates are what’s really driving the economy (well, Wall Street). In the second-largest economy in the world, China, growth has slowed. In Japan, which is the world’s third-largest economy, an aging population has led to lower consumer spending and deflation. The Bank of Japan is fighting back with monetary stimulus. Then there’s the Eurozone, where the European Central Bank is also printing money to fight against deflation. (For related reading, see: Did the Stimulus Work? It Depends on Whom You Ask.)

Translation: global demand has waned. Unfortunately, there’s no clear catalyst for organic growth to pick back up. This is a negative for oil. The other negative is simply oversupply. Based on these circumstances, oil is more likely to drop than rise over the next year, and perhaps well beyond. However, there will still be pops, and oil could skyrocket following a prolonged period of pain. (For related reading, see: Guide to Oil and Gas Plays in North America.)

When the economy actually recovers organically, then the recent and lengthy low-interest rate environment should lead to rampant inflation. This, in turn, could lead to a significant increase in the price of oil. That would be a long time from now. However, there would be nothing wrong with investing in top-tier oil companies now, which would allow you to buy more on dips. But that’s your call. Regardless of what you choose to do, the Top 10 Oil Stocks for 2015 have been listed below for your convenience. While some are speculative plays, others are here thanks to their resiliency and dividend. (For related reading, see:Top Oil ETFs.)

Okay, so Warren Buffett sold his stake. That’s not necessarily bad news, but it can’t be seen as a positive, either. Nevertheless, Exxon Mobil is currently trading near its 52-week low and at 12 times earnings. Its three-year stock performance of up 13.99% isn’t incredible in this market, but it has only depreciated 1.53% over the past year. That might seem like a negative, but many oil stocks have been whooped due to the precipitous drop in oil over the past several months. Exxon Mobil has held its own while offering a 3% annual dividend yield. (For related reading, see: ExxonMobil’s Massive and Reliable Money Machine.)

Despite slowing growth in China, PetroChina has showed consistent top-line and bottom-line growth through the years, and it currently yields 4.90%. That said, the slowdown in China and a bear market in oil might have a negative impact going forward.

Ignore the oil refinery strike story. That’s a short-term event. What’s more concerning are declines in revenue and net income on an annual basis. These aren’t big moves down, but it’s still not inspiring. Fortunately, Chevron currently yields 3.8%, and it tends to hold up better than most peers during difficult times – relatively speaking. (For related reading, see: How Chevron Found Itself Spanning the Globe.)

Statoil is all over the news because if everything goes well with its Johan Sverdrup oil field, it will be capable of producing the cheapest oil in the world. The break-even number for profitability: $40/barrel. At a cost of $29 billion, this will be the most expensive offshore energy project ever in Europe. The Johan Sverdrup oil field is expected to be in full operation by 2019. Statoil yields 4.9%.

Buffett sold his stake here as well. That’s a negative. Like him or not, he’s very good at seeing macro trends ahead of time. However, ConocoPhillips is expected to increase production by between 2% and 3% while cutting capex by 2013 in 2015 versus 2014. ConocoPhillips also yields 4.20%. (For related reading, see: Cashing in on Macroeconomic Trends.)

BP is one of those few companies throughout the broader market that has a knack for slowly but very consistently increasing its revenue on a year-over-year basis. And, of course, it’s always very profitable. Add the fact that BP generated $32.75 billion in operational cash flow over the past twelve months and maintaining that 5.70% dividend yield appears to be feasible.

Phillips 66’s revenue declined 19% in the fourth quarter (yoy). However, earnings per share increased 39%. But there are more important points here. One, hedge fund Third Point Management initiated a new position in PSX — 5 million shares at a cost of $359 million. Someone is a believer considering this will represent 3.23% of Third Point’s portfolio. Additionally, Phillips 66 CEO, Greg Garland said on the company’s Q4 conference call, “Investments in Midstream chemicals should result in more consistent earnings and a higher valuation.”

As a refiner, it’s more resilient to low oil prices. It has delivered consistent bottom-line growth, it’s trading at nine times earnings, it sports an ROE of 18.41%, and it’s currently yielding 2.70%. (For related reading, see: The Difference Between Oil Services and Refiners.)

This is not a traditional play. It’s a play for those who are firm believers that oil will spike again soon. From an objective perspective, this is a possibility. Delek’s stock has been on fire over the past three years, appreciating 165% over that time frame. The problem is that Delek isn’t in a good position from a competitive standpoint if oil prices remain low.

Another refiner. Capable of generating consistent cash flow, which helps protect the 2.90% yield. An ROE of 28.77% is also impressive. Western Refining has been a consistent grower on the top line. While the bottom line hasn’t been as consistent, steady and solid profits are the norm. (For related reading, see: Why Schlumberger is a Name You Should Know.)

Now you have a head start if you plan on investing in oil in 2015. In my opinion, oil is likely to close lower at the end of the year than where it is now, but I’ve been wrong before. Please do your own research prior to making any investment decisions. (For related reading, see: 2015’s Most Promising ETFs.)

Dan Moskowitz does not have any positions in any of the stocks listed above.