Most Americans, not covered under government healthcare programs, have been feeling the higher cost of healthcare since Obamacare as traditional policies give way to high deductible plans which cost them more than their previously “more” inclusive lower deductible plans – so much for “keeping your healthcare plan.” Commonsense dictates that restructuring so those who actually pay are now required to pay the subsidies for those who previously couldn’t afford healthcare will have to pay more. Free or subsidized “mandated” lunches aren’t really free.

Today the Supreme Court ruling came down on the language used to “pass the law” in 2010 which offered subsidies to states which established exchanges to be more inclusive than the initial “carrot on a stick” or “punitive” wording (intended to force states into compliance if the Obamacare architect Jonathan Grubber is to be believed). 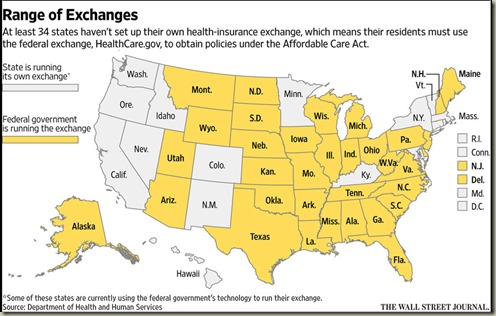 The court ruled in a 6-3 decision to uphold subsidies to all who purchase from Obamacare exchanges … including those run by the Federal government.

Chief Justice Roberts said the challengers raised strong arguments that snippets of the law’s wording supported their position, but he agreed with the Obama administration that the structure and context of the law supported its interpretation that insurance subsidies should be available nationwide.

The insurance subsidies “are necessary for the federal exchanges to function like their state exchange counterparts, and to avoid the type of calamitous result that Congress plainly meant to avoid,” he wrote.

The subsidies are a central element of the law, which aims to make it possible for low- and middle-income Americans to buy coverage if they don’t have access to health benefits through a job or government program such as Medicare. They are directly linked to other provisions in the law, including the requirements that most individuals buy coverage or pay a penalty, and that large employers offer health benefits or pay a penalty. The subsidies also are key to the workability of the law’s requirements for insurers to sell coverage to everyone regardless of their medical history.

The Internal Revenue Service issued regulations in 2012 implementing the subsidy provisions, saying the law meant for subsidies to be available in all states, not just in those that established their own exchanges. The Supreme Court’s ruling upheld the IRS rules.