It has been a long time in coming, but the PineA64 Kickstarter project that I backed in January finally arrived. As start-ups, this one 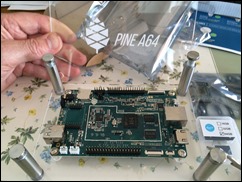 was not as smooth as it could have been. The team promised deliveries in March, then April and finally no later than May. Eventually June and finally July for the last few Kickstarter backers (something to do with shipping from China and a few accessories some of us ordered — in my case the 64GB SD card with Remix OS).

Nevertheless it arrived and I quickly unboxed and fired it up with Remix OS … yuck .. I’ll be imaging Linux, although not sure of the flavor? No time at the moment to play with it so it will sit on the back burner for a while. More to come.