Last year, the social networking company Twitter announced it would begin changing the requirement that all

tweets could only contain 140 characters. They started with not counting characters of the media attachments or @ replies.

Some users are concerned that Twitter will stray too far from its roots as a public text messaging service tool. SMS messages are limited to 160 characters, so Twitter use a limit of 140, thinking to leave room for a username ahead of the tweet. As user names grew, attachments bit into character count and @replies became common for exchanges, very few characters were left for the actual thought. Users became inventive and sent multi-part thoughts, graphic images of text just to get their point across. The once short and poignant statement started to disappear even though "most" users were not supportive of the "tweetstorm" practice.

In looking for a compromise, Twitter is attempting to be true to the purist and base who prefer living with 140 characters, but has freed up the characters when it comes to replying to others. You can now tap on the “Replying To” field to see who’s in the conversation and make changes to the reply list, when responding and no longer be limited to just a couple characters for the reply without deleting listed users. This is done by unchecking the checkboxes in the small pop-up that appears on the screen after tapping this field.

TechCrunch mentioned that "the change also aims to make reading longer conversation threads easier, because this “Replying To” field is much smaller and not in the tweets themselves. That way, you can focus on reading the actual posts, without having to first note the usernames."

Be careful though, “Replying To” field is fairly small. It is easy to think you are starting a new tweet when you are really replying. Why is this important? "Because replies are a second class kind of tweet. Not everyone sees your reply appear in their Timeline, even if they follow you. Instead, they only see the reply if they follow both you and the recipient." 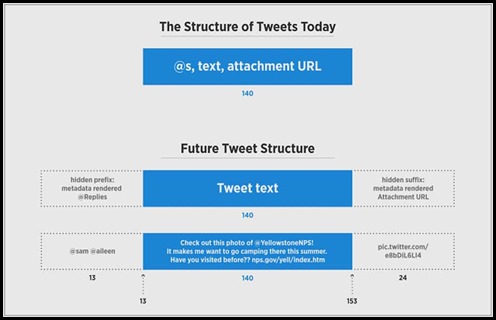 Replies are also tucked away in a secondary tab in users’ Twitter Profile page, “Tweets & Replies.” (Twitter earlier this month updated users’ profiles on mobile to display replies in the separate tab, like they are on the web.)

Because of the lower visibility for replies, users started putting a period (“.”) ahead of any reply they want all their followers to see, where they were referencing someone else’s tweet. This, too, has become something of a Twitter convention.

The change to replies marks an end of an era for Twitter. The company helped to popularize this format and bring it into the mainstream. Today, using the “@” symbol to mention someone is supported across a range of services, including Facebook, Instagram, Tumblr, LinkedIn, Slack, and even Outlook, among others.

While Twitter is making these changes as a means of trying to simplify its service for users, it’s really just swapping out one set of rules for another.