If we coddle, protect and give, are we doing a disservice?

I generally do not read longer Facebook posts, but while scanning a few friends comments on Father’s Day remembering their dads, Kathy Pangborn (good friend and neighbor of my inlaws) reposted a story that had me remembering the different father-types that I knew.

Neither my mother or father-in-laws’ or mother or fathers’ parents (my grandparents) went to college or were more than blue collar working-class, which was common for most in the United States in early 1900s. The next generation started to change. My mother-in-law became a teacher and obviously my father-in-law (DadH) being a dentist valued a college education and saw the benefits of a professional life for his kids. In part this was likely due to losing his father at 1 year old and seeing his mother struggled to take care of him through the depression without any career skills. As a way to provide, college was seen as the best way to start for all in their family. And although my father (DadC) did eventually go to night school when he was older, he worked primarily in management positions most of his career. Still, he was never really the "must go to college type" and expected that if a college education was something I wanted, then it was something I needed to initiate, pay for and be independent about — although my parents did a lot to help me along. What my dad did instill in me was hard work and in particular that it was NOT something to avoid or "think I was above." (frankly it never occurred to me NOT to start at the bottom or that some jobs were beneath me … a trait all too common in American society today)

There were two parts of the story below that stood out to me. The first was the "printing company" reference and "hands" …

that  for years (prior to latex gloves) in my case were challenging to keep clean and free of ink; my hands in the early years were never really totally clean and when they were, the solvents dried and crack the skin unmercifully. (I wore gloves and Eucerin creme to bed many nights, especially in the wintertime. What a miracle cure!) 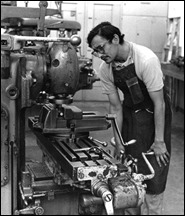 The second is Italian immigrant Vito, a machinist with broken English, who worked from dawn until dusk every day for his family. He ended up buying my Consolidated Printing and Publishing building in his later years and because I owner financed the building to him, I ended up realizing exactly what a Millionaire Next Door was. His wife Jean brought him lunch each day, took care of the home and helped him manage their significant number of rental properties. Even though in my eyes, he really didn’t need to keep hand machining parts, hour after hour, he did. They were the quintessential immigrant husband and wife who saw America as a place that rewarded whatever skill you had, you individualism and hard work no matter your background. I admired them in many ways, BUT they were the perfect example of parents wanting life better (different?) for their sons. The boys never did without, nor did they help in the machine shop OR picked up their parents work ethic (they were in their 20s, not in steady jobs or in college). As the story below goes, Vito did a disservice to his boys by not wanting them to get their hands dirty or perhaps have to live the life of an immigrant to America. 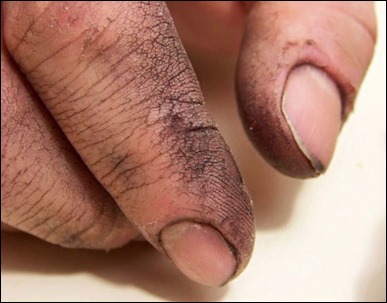 A young man went to seek an important position at a large printing company. He passed the initial interview and was going to meet the director for the final interview. The director saw his resume, it was excellent. And asked,’

"Have you received a scholarship for school?" The boy replied, "No".
‘It was your father who paid for your studies? ” Yes.’ He replied.
‘Where does your father work? ‘ ‘My father is a Blacksmith’

The Director asked the young man to show him his hands.
The young man showed a pair of hands soft and perfect.
‘Have you ever helped your parents at their job? ‘
‘Never, my parents always wanted me to study and read more books. Besides, he can do the job better than me.

The director said:
‘I have got a request: When you go home today, go and wash the hands of your father and then come see me tomorrow morning.’

The young man felt his chance to get the job was high.

When he returned to his house he asked his father if he would allow him to wash his hands.

His father felt strange, happy, but with mixed feelings and showed his hands to his son. The young man washed his hands, little by little. It was the first time that he noticed his father’s hands were wrinkled and they had so many scars. Some bruises were so painful that his skin shuddered when he touched them.

This was the first time that the young man recognized what it meant for this pair of hands to work every day to be able to pay for his studies. The bruises on the hands were the price that his father payed for his education, his school activities and his future.

After cleaning his father’s hands the young man stood in silence and began to tidy and clean up the workshop. That night, father and son talked for a long time.

‘Can you tell me what you did and what you learned yesterday at your house?’
The boy replied: ‘I washed my father’s hands and when I finished I stayed and cleaned his workshop.’

‘Now I know what it is to appreciate and recognize that without my parents, I would not be who I am today. By helping my father I now realize how difficult and hard it is to do something on my own. I have come to appreciate the importance and the value in helping my family.

The director said, "This is what I look for in my people. I want to hire someone who can appreciate the help of others, a person who knows the hardship others go through to accomplish things, and a person who realizes that money is not his only goal in life".

A child that has been coddled, protected and given everything he or she wants, develops a mentality of "I have the right" and will always put himself or herself first, ignoring the efforts of parents, family and friends. If we are this type of protective parent are we really showing love or are we helping to destroy our children?

You can give your child their own room in a big house, good food, a computer, tablet, cell phone, and a big screen TV, but when you’re washing the floor or painting a wall, children need to experience that too.

Children need to learn to appreciate the amount of effort it takes to do a job right. They need to experience the difficulties in life that people must overcome to be successful and they must learn about failure to be able to succeed.

Children must also learn how to work and play with others and that they will not always win, but they can always work harder to reach their goals. If they’ve done their best, then they can take pride in all the effort they put forth.

Life is about giving and serving and these qualities are taught in our homes.