Nothing like remembering summer fun from the summer of 1977 some 40 plus years ago and the upbeat song "Dancing Queen" by the Swedish group ABBA (from their October of 1976 released Arrival album). 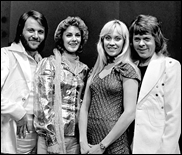 It was a hit for them during the mid-70’s disco era … and Europop, which is Europe’s equivalent. Generally I was not listening (or dancing) with platform shoes or bellbottoms, but there were a few songs that infected even those of us who stuck up our noses at disco music.

Oh, well … the memories of that time are still good … even if I was a stick in the mud.