The passing of our most qualified president – George H. W. Bush

Perhaps it is human nature to reflect on ones own personal shortcomings and selfish thoughts at the passing of another well remembered United States president? President George H.W. Bush (1924-2018) lived an amazing life in an amazing time to have been alive. His completed life reminded me of a verse in Ecclesiastes (see bottom of post).

I remember President George H. W. Bush for the most part fondly as do most Americans who set aside divisive politics on a death of a president, but also remember the tense times our country faced during his many decades of service to our country – true patriotism.

My reference to "most qualified" has much to do with this 41th president’s life of service to his country. From day one of World War II, the bombing of Pearl Harbor, and his decision to forgo Yale to serve as a Navy aviator, Bush demonstrated his patriotism and love for country from 1942-45. He was shot down and plucked out of the ocean by a submarine. After the Navy, he returned to Yale and was offered a cushy position with his father’s firm, but chose instead to take the risk learning a new to him industry — oil. He and his new bride, the late Barbara Bush gave up all and moved to Texas. 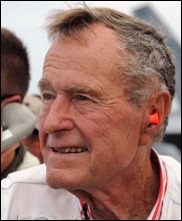 From the ground up as an entrepreneur Bush grew a successful company, ran for congress and suffered both losses and victories. He gained political insight and humility that served him well in future positions. He rose in the Republican party to serve as chair and in national positions such as being the 10th U.S. Ambassador to the United Nations from 1971-73. He was then asked to be a Liaison to China before we had diplomatic relations, which he referred to as his sabbatical years (no staff, riding a bike around and meeting the Chinese people).

President Gerald Ford recognized Bush’s value and appointed him to become the 11th CIA director at the height of the cold war with the USSR. Those who are younger likely don’t remember the tense times during the 1950s through 80s as we faced the threat of nuclear annihilation and communism dominating the world; it was the big picture concern for a generation of Americans (and perhaps still exists as socialist central control dictatorial philosophy continues in 2018?)

The United States continued to seemingly decline during the late 1970s as even small adversaries such as Iran became a thorn in President Carter’s presidency. Bush was asked to serve in our nation’s second highest position, this time as President Ronald Reagan’s Vice President. Those 1980s years saw a revitalization in this country and a decline in the flawed communist system in the USSR. It was only natural that as a successful  VP, that George H.W. Bush and the Republican Party would convince the country that he could continue the rebuilding started under Reagan.

Unfortunately the contentious politics that exist in our capitalist system often rewards some more than others, making conditions ripe for divisive politics, especially as the cyclical of our economy slumped. 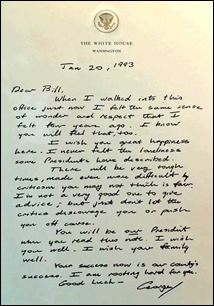 That along with policing our interests and protecting smaller nations around the world, left President Bush as a wartime president who’s focus was on Saddam Hussein and an aggressive Iraq. At the end of his 4 year term, the country grew tired of Republican leadership, a slump in the American economy and chose a new generation leader — Democrat and 42nd President Bill Clinton. As gracious as he was competitive, President Bush 41 left a polite letter on his desk for the incoming youngster. In later years, these two political adversaries became close friends and likely only after their presidency, recognized the challenges and weight of the office only known by those who sit in the Oval Office. One can only hope that this kind of bond is one that all who have the best interests of America at heart will be able to emulate.

I’m thankful our republic has had patriots like President George H. W. Bush willing to protect and defend our nation. On reflection, I recognize that it is not always the vision an administration has when elected that defines a president’s legacy, but how a leader rises to different unplanned challenges that confronts each who serves as our president – evident less than a decade later by the attack on 9/11 that faced another Bush president.