Low inflation. Will it continue? It depends on who you ask.

An interesting take on “inflation” and how different generations perceive the possibility of it accelerating in the next decade or so … and perhaps the effect it can or will have on our lives. For example, in the graph below, pick your birth year and note the color bars to determine how many years of 0 to 6% inflation per year. Interesting. 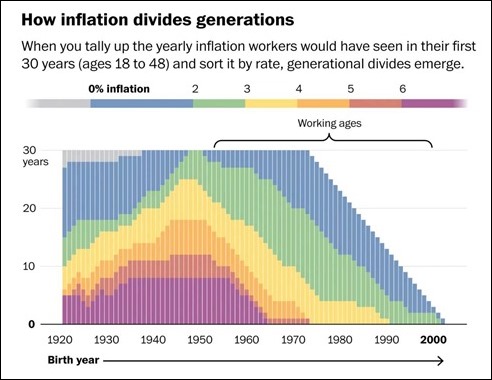 For millennials in Generation “Z” and “X,” hardly remembers inflation or is concerned just how painful high inflation can be. They can’t relate to double-digit home loans or borrowing for cars at credit card rates. The boomers often recall the pain and difficulty in planning one year to another with inflation running nearly 10% each year in the 1970s and 80s.

Some of use who grew up with this as a “normal concern,” anxiously look at the economy through the skewed lenses of inflation … even when there hasn’t been any for years (or very much). Instead of watching the Federal Reserve flit back and forth with rates in the very low digits as it has for a couple decades, 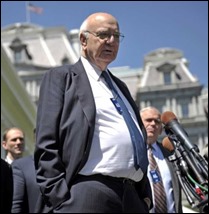 the late Federal Reserve Chairman Paul Volcker jacked rates up to nearly 20% and kept them high for a long period of time in order to stop inflation. I remember thinking, “Hm, if I could safe enough to buy a few 30 year Treasuries yielding 10%, I could live off that interest.”

But it did not continue and as a result we now have a generation that has never truly felt the impact of inflation. As a Washington Post article commented last month, Volcker “not only broke inflation’s back but seemed to cripple it forever.”

Today’s workforce barely remembers Volcker’s titanic showdown with rising prices. Fewer than a quarter of today’s working-age Americans were over age 18 at the time — and they’re all baby boomers.

“There’s a generation of both people and economic analysts who never experienced the monster that Volcker slayed,” said Jared Bernstein, a senior fellow at the Center on Budget and Policy Priorities who served as chief economist to Vice President Joe Biden.

Pile it up for enough years and slow price growth becomes self-perpetuating. Compared with folks who lived through high inflation, those who experienced less inflation during their life will expect inflation to be lower in the future — even if they’re looking at the same economy, according to an analysis of responses to the University of Michigan’s long-running survey of consumers by economists Ulrike Malmendier of the University of California at Berkeley and Stefan Nagel of Stanford University.

For example, during the Volcker era, the inflation expectations of young Americans soared relative to those of their older peers who entered the workforce when inflation was lower. Those older peers had watched prices grow modestly during the 1950s and 1960s and lowered their expectations accordingly, Malmendier and Nagel write. Their widely cited study was published in the Quarterly Journal of Economics.

Since 1982, Americans’ expectations for inflation in the year ahead have settled into a narrow band around 2 and 3 percent, a far cry from the double-digit levels they hit early in Volcker’s term, according to that same Michigan survey.

It makes sense that adults today would pay much less — if any — attention to inflation compared with older Americans who came of age during economically volatile times, said Emi Nakamura, a UC-Berkeley economist whose research on prices recently helped earn her the John Bates Clark Medal awarded yearly to a top economist under age 40. That shift eases pressure on the Fed, Nakamura said, because even where there are deviations from the target of 2 percent, people’s broad expectations are still very anchored.

“It puts the Fed in a very nice position in terms of not having to worry about very rapid changes in inflation expectations,” Nakamura said.

“The fact is essentially that this goal of achieving stable inflation has been achieved,” she added. “And I think most people attribute a large part of what happened to the tenure of Volcker.”

Painful as it was at the time, Volcker’s approach “opened the door for much longer, moderate expansions,” said Diane Swonk, chief economist at the professional services firm Grant Thornton. More sustained periods of growth allowed Americans who hadn’t benefited from shorter bursts of prosperity to get ahead.

“There are many problems in the broader economy, but long expansions are a gift,” Swonk said. “Paul Volcker hit the reset button. ”

Beyond just slashing inflation, Volcker upended many of the rules that had governed economic policy for years. For example, Bernstein said that in Volcker’s day, an unemployment rate below 6 percent would kick-start worries about spiraling inflation. That was because economists worried that a competition for scarce workers would drive up wages, which would be passed on to consumers in the form of higher prices. The cycle would escalate until it pushed the economy into recession, they feared.

“Then six became five, five becomes four, and now, to be honest, we really don’t know the lowest unemployment rate that’s consistent with stable prices,” Bernstein said. He noted that current Fed Chair Jerome H. Powell has often said that the central bank doesn’t really know what full employment, or the situation in which almost everyone who wants a job has one, looks like.

The Fed has now mulled how far to let inflation rise. It has suggested in recent years that it is comfortable with a 2 percent inflation rate, but even that has been hard to achieve. Some argue that the Fed’s preoccupation with inflation has made it less sensitive to the need to stimulate the economy and continue to drive down unemployment by keeping interest rates low and lending cheap.

“It’s hard for people today to imagine inflation being a factor in their economic lives because we don’t have any now, and nobody thought that was possible in 1979 when Volcker became chairman,” said David Wessel, director of the Hutchins Center on Fiscal and Monetary Policy at the Brookings Institution.

“When Paul Volcker became Fed chairman, who could imagine a headline that says ‘Federal Reserve trying to raise the inflation rate, and failing,” Wessel said.

“The notion that it no longer enters into people’s decision-making is a major change,” Wessel said.