Music Monday: Band on the Run – Paul McCartney and Wings

Our current Ohio “stay-at-home” order due to the Coronavirus has me thinking that a few lines from the Band On The Run lyrics are fitting for our current #socialdistancing situation. I for one have found myself wanting to “go someplace” or to get in the car just to get out of the house. Brenda suggested getting carry-out food even 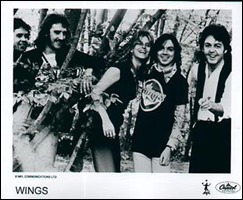 though we didn’t really need anything … she is antsy too. On a side note … somewhat in deference to Paul McCartney who is from the UK … the American “carry-out or take-out” is called “take-away” in Britain and many British colonies (it is quirky how the mind works … but a Twitter friend just mentioned the same thing!) .

So for this week’s Music Monday, here’s Band On The Run and a link to a Nicki Bluhm and the Gramblers Van Session version of the song.

Stuck inside these four walls,
Sent inside forever,
Never seeing no one
Nice again like you,
Mama you, mama you.

Well, the rain exploded with a mighty crash
As we fell into the sun,
And the first one said to the second one there
I hope you’re having fun.

Well, the undertaker drew a heavy sigh
Seeing no one else had come,
And a bell was ringing in the village square
For the rabbits on the run.

Band on the run,
Band on…