Many diesel advocates are anxiously waiting to see just what new clean diesels will be arriving in the U.S. over the next few years. Hardly a week goes by now without some new announcement. For many of us, the Honda Accord 2.2L i-DTEC stands out in the hopes it will be an affordable and dependable diesel for the masses. According to reports from overseas and press reports, the Honda diesel is capable of over 60mpg). In keeping with that theme, their upscale Acura line is being redesigned and they have announced at the Detroit Auto show that they will have the diesel too. 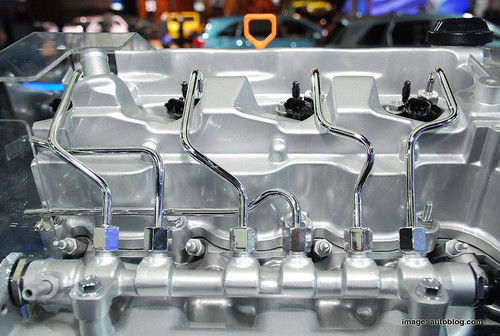 Several automotive blogs have mention that the TSX would be the Acura vehicle of choice in receiving the Honda 2.2L i-DTEC diesel.

The TSX seemed like a likely candidate for diesel power as it is basically the Euro-spec Honda Accord â€” a vehicle that will hit European showrooms this summer with a diesel option. Honda’s new 2.2L i-DETC four-cylinder will power both vehicles. Honda will also launch a V6 clean diesel in 2010, which will likely see duty in the Acura TL and MDX. The Honda Pilot could also use a version of the engine. “All along, we’ve said there would be a diesel in Acura,” Dick Colliver, executive vice president of American Honda Motor told Automotive News.