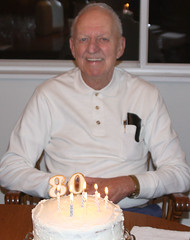 I enjoyed spending the day with my dad and celebrated his 80th birthday along with my brother and his family.  The milestone was merely a number for my dad since he is doing great and has no complaints. We took him out to dinner and probably enjoyed a little too much cake and ice cream when we returned home — thanks mom. 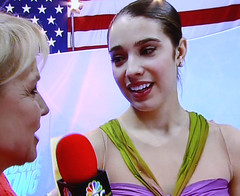 for the U.S. Figure Skating  Championships since last year, but they were having a great time reconnecting with friends and skaters. I watched the last hour on NBC after returning home Saturday night as Alissa Czisny rebounded to win the women’s title. I’ll look forward to getting the ‘scoop’ from my daughter.

As a family we spent many years either at the rink or at competitions with my daughter while she was a member of the Queen City Figure Skating Club. I spent many mornings taking her to practice at 5AM for practice and getting her to school before classes started. My son  remembers sitting at the Bob Evan’s restaurant reviewing his spelling words every Friday morning — I’d like to say it helped? Nevertheless it was a great time of bonding over breakfast even if our eyes were half shut.

Although we watch our daughter competed at the regional and junior levels, we never made it to the national championships. Thankfully for my wife and daughter, they were able to do it without the stress of competing this year. Figure skating was a great sport, particularly for my daughter; it not only developed her into a  physically toned and confident athlete, but taught her poise, grace and discipline, which she exhibits everyday.

As for Saturday’s winner, Alissa Czisny at 21 years old beat the reigning world junior champion Rachael Flatt.  Her skate was elegant even though she wasn’t able to land her jumps perfectly. The Associated Press called Alissa’s win, “a rebound for the ages,” … and although I wouldn’t go that far, it was great to see someone closer to my daughters age win at nationals. 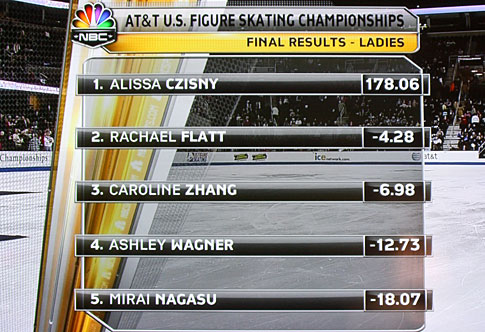