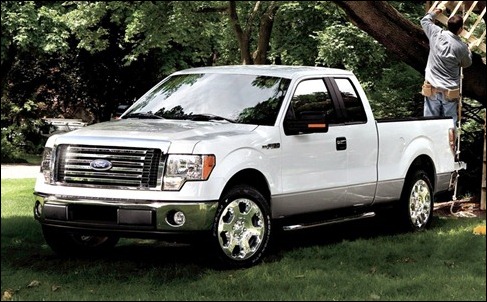 I would like to hear more about the Eaton “hydraulic hybrid powertrain” that both Chrysler and Ford are developing for mini vans and light trucks. I’ve heard of them being used in larger trucks, and delivery vans, but haven’t seen them in consumer vehicles yet. Some of the more interesting numbers being toss around suggest that it “may boost the highway fuel-economy of Ford’s best-selling F-150 pickup by about 80 percent compared to the conventional gas-powered version. The Center for Compact and Efficient Fluid Power (CCEFP), along with Folsom Technologies, is developing a prototype powertrain for an F-150 that will deliver as much as 40 miles per gallon highway.” This sound promising since Americans do like their SUVs, trucks and minivans.

A hydraulic hybrid powertrain similar to the one Chrysler is developing for its minivan with the U.S. Environmental Protection Agency and Eaton Corp. may boost the highway fuel-economy of Ford’s best-selling F-150 pickup by about 80 percent compared to the conventional gas-powered version. The Center for Compact and Efficient Fluid Power (CCEFP), along with Folsom Technologies, is developing a prototype powertrain for an F-150 that will deliver as much as 40 miles per gallon highway. The CCEFP is part of the National Science Foundation Engineering Research Center and includes seven universities and 55 industrial companies.

The CCEFP is following up similar efforts by Chrysler and the EPA, which announced last month that they would adapt hydraulic hybrid technology for the light-duty auto market with the goal of designing a Chrysler minivan as a demonstration vehicle by 2013 using EPA’s own patented technology. A joint engineering team will design and integrate the Chrysler-EPA hydraulic hybrid system into a minivan and test the demonstration vehicle in 2012. The minivan will feature a unique powertrain that replaces the automatic transmission.

The hydraulic hybrid system differs from conventional hybrids, which use batteries to store power and reduce the work done by the combustion engine,  by capturing and reusing the energy lost in braking through a hydraulic pressure vessel. The system can also turn off the engine when it is not needed and only fully use the engine when it can operate at peak efficiently.

The F-150, which was donated by Ford, is the second such hydraulic hybrid powertrain product worked on by the CCEFP. The group’s first stage involved a Polaris Ranger all-terrain vehicle that the CCEFP started working on about five years ago. Pickuptrucks.com originally reported on this project.

The Ford F-150, in its two-wheel-drive, 3.5-liter six-cylinder version, gets an EPA-rated 22 mpg highway and 19 mpg combined. By reaching the 40 mpg highway threshold, the F-150, using the new system, would vault past Ford’s four-cylinder Ranger, which gets a class-leading 27 mpg highway with a five-speed manual transmission.