Could a magnetic highway charge a car more than it uses?

For years automotive postulaters have envisioned a car being charged by embedded coils in the highway, but a comment in an article attributed to one researcher at Stanford sounds a little far fetched … maybe even stretching the laws of physics? 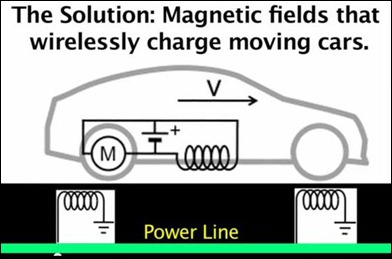 Stanford researchers say they can develop what’s essentially an electric highway that one of the researchers said may give an EV a higher charge after driving than before the trip started.

I’m a little skeptical unless the car is rolling downhill, has a very efficient charging systems with solar panels on the roof and some kind of induction charging device in the roadbed besides the passive magnetic coils.

That said, it will be interesting to see where EV is heading over the next few decades … I have no doubt that we’ll all being driving some form of an electric vehicle … maybe even a diesel-hybrid in a year or two (what’s taking so long?)

Volvo has said that estimated fuel costs will be one-third compared with a conventional combustion engine. The diesel-hybrid wagon was unveiled at the 2011 Geneva Auto Show. Volvo says the fuel economy is the equivalent of 124 mpg, with CO2 emissions of just 49 g/km.