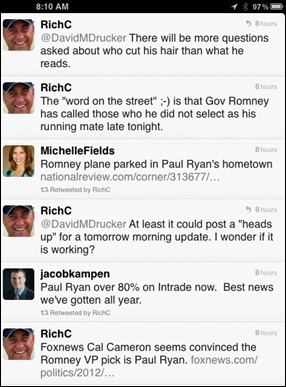 So much for the “Mitt’s VP app” introduced by the Romney campaign last month. While paying attention to Twitter last night (and sharing a few tweets – right), the app on my iPad sat quiet. Each cable news channel was speculating who would be announce as Gov. Romney’s running mate and Foxnews campaign follower, Carl Cameron, pretty much confirmed that it would be Wisconsin congressman Paul Ryan (my first post back in 2009).

While I wait for the announcement this morning aboard the USS Wisconsin in Norfolk, Virginia, I finally notices something appear on the “Mitt’s VP” app … a single photo of Romney and Ryan, but no announcement. So far a disappointment in the use of mobile technology, but a positive and bold pick by Mitt Romney and his campaign. Let’s hope that adding Paul Ryan to the ticket will bring real substance to the campaign mudslinging nonsense we’ve been seeing in recent weeks. 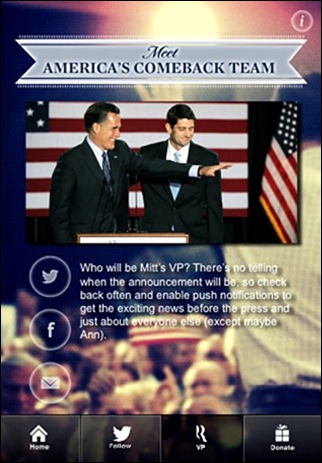