Remembering Patriot Day and the victims of 9/11 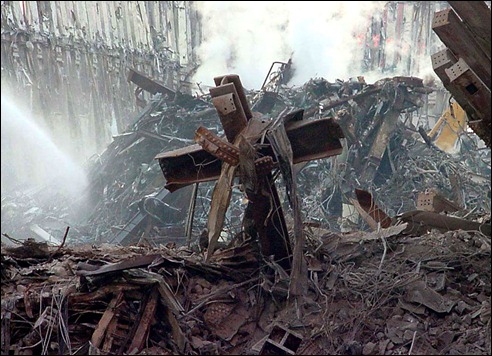 Today is Patriot Day and National Day of Service and Remembrance; it is a day to remember the 2,977 killed in the September 11, 2001 terrorist attacks. After congress unanimously passed Joint Resolution 71 on October 25, 2001 and President George W. Bush signed it into law on December 18, 2001, we now remember and fly our flags at half staff to remember the victims of 9/11. Initially its was termed “Prayer and Remembrance” … now a more politically correct “just” remembrance, but “pray” is what I will do. In 2010, I posted the victims’ names on this blog … click on the link … and suggest you pick one from the list and pray for their family today.

Let’s keep our intelligence, military and homeland security forces strong and remain focused and ever vigilant, never giving our enemies such an opportunity again.

Below is President Obama’s 2012 statement to our nation:

On September 11, 2001, a bright autumn day was darkened by the worst attack on the American people in our history. Thousands of innocent men, women, and children perished when mighty towers collapsed in the heart of New York City and wreckage burned in Pennsylvania and at the Pentagon. They were family and friends, service members and first responders — and the tragedy of their loss left pain that will never fade and scars our country will never forget.

More than a decade later, the world we live in is forever changed. But as we mark the anniversary of September 11, we remember what remains the same: our character as a Nation, our faith in one another, and our legacy as a country strengthened by service and selflessness. In the spirit that moved rescue workers and firefighters to charge into darkness and danger that September morning, we see the same sense of moral responsibility that drove countless Americans to give of themselves in the months that followed. We offered our neighbors a hand and lined up to give blood. Many helped our Nation rebuild and recover long after the dust had settled, donating and volunteering and helping survivors who had borne so much. We were united, and the outpouring of generosity reminded us that, through challenges that have spanned from acts of terrorism to natural disasters, we go forward together as one people.

Today, as we remember the victims, their families, and the heroes who stood up during one of our country’s darkest moments, I invite all Americans to reclaim that abiding spirit of compassion by serving their communities in the days and weeks ahead. From volunteering with a faith-based organization, to collecting food and clothing for those in need, to preparing care packages for our men and women in uniform, there are many ways to bring service into our everyday lives — and each of us can do something. To get involved and find a local service opportunity, visit www.Serve.gov, or www.Servir.gov for Spanish speakers.

Even the simplest act of kindness can be a way to honor those we have lost, and to help build stronger communities and a more resilient Nation. By joining together on this solemn anniversary, let us show that America’s sense of common purpose need not be a fleeting moment, but a lasting virtue — not just on one day, but every day.

IN WITNESS WHEREOF, I have hereunto set my hand this tenth day of September, in the year of our Lord two thousand twelve, and of the Independence of the United States of America the two hundred and thirty-seventh.