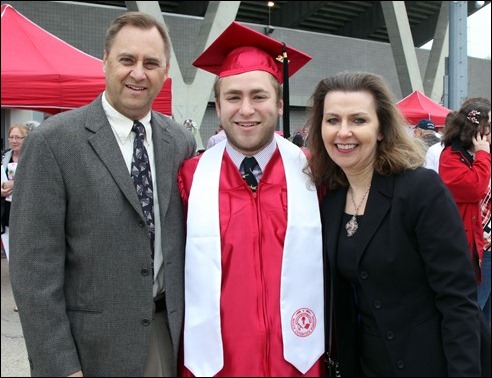 We proudly celebrated my son Taylor’s Miami University’s college graduation this weekend at Yager Stadium in Oxford Ohio and later with more family downtown Cincinnati for dinner. Brenda and I enjoyed seeing our son and his fellow college graduates in their caps and gowns enter the stadium, even if the weather was on the cooler side – it would have been perfect for a late autumn football game. 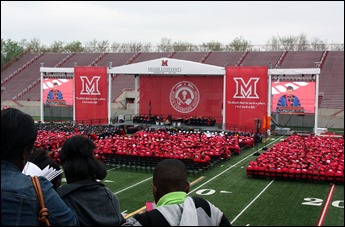 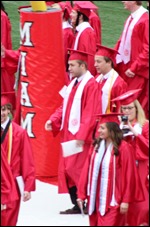 President Hodge’s address to the graduating class was great and the writer and author Will Haygood the commencement speaker was exceptional. He was an excellent invite and his personal story as a 1976 Miami University graduate struck a chord since his major was in Urban and Regional Planning (one of Taylor’s two majors). He also shared how life after Miami took a turn, as it does for many of us, and his education opened

doors and passions in other directions. He became a reporter for several newspapers and eventually covered major stories for The Washington Post. One recent front page story was about the long time butler Eugene Allen who served as the Whitehouse butler for eight presidents and became the subject of a movie that will be release in the fall – The Butler (trailer). He left the graduates inspired and hopeful … and I expect as just as like those 174 years of Miami graduates in the past, they will make the most of their college degrees. It was particularly nice to have Taylor’s Grandpa Corbett with us and I know he enjoyed the day very much.

The newlyweds, Drew and Katelyn were with us as well, although I wonder how these two hospital residents juggle their schedules and get enough sleep? Katelyn had just finished a 24 hour rotation and came with an hours sleep … she was dragging by the end of dinner.

Speaking of dinner, since Taylor has spent much of this year working on his urban planning senior capstone project in the Over-The-Rhine neighborhood of Cincinnati, we opted (his choice) to have graduation dinner downtown at the Mayberry Gasto Pub. Brenda’s sisters family joined us for the celebration and pretty much took over the small restaurant for much of the early evening. All in all it was a great day and we had a great time. Congratulations Taylor … you continue to make your parents proud everyday.

Including a slide show below viewable by those who are in my G+ circles. Ask me and I’ll add you to a circle as I’m trying to use this as a way to make some photos viewable but limited — we’ll see how it work?