The more delays and longer the flight, the more cranky passengers are bound to get. Now imagine sitting in the middle seat of modified Airbus A320 as the scrunched seats get smaller and give up 3 more inches to the aisle seats? Oh, I’m sure those fortunate enough to book the wider seats, will be happy, but at the expense of your two seat mates? 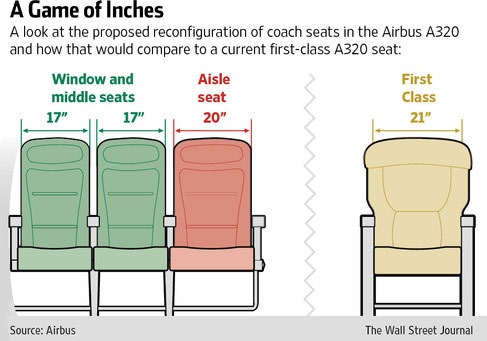 A “Middle Seat” travel article in the WSJ today mentioned that Airbus is offering a wider seat to airlines “thinking” they could squeeze a few more dollars from travelers willing to buy “more square inches of space” (I’m thinking about the Michael Douglas character talking to Kathleen Turner in “War of the Roses” – see YouTube trailer about the 1:50 mark).

According to Scott McCartney, Airlines are surprisingly reluctant to price their wider seats higher as they do for those with more legroom — we’ll see how long that lasts. For now, it looks like keeping a close eye on the aircraft model (A320)when I book tickets … although suspect most of us over 6 foot are already vying for the aisle seats?

Snippet below … pertaining to our “growing girth.”

The growing girth of people has led to wider seating areas in many public situations where space is limited and packing in seats can lead to more revenue. In 1990, the average seat in performing-arts theaters was 21 inches. By 2010 that grew to 22 inches, according to a study by Theatre Projects Consultants Inc. The new Yankee Stadium opened in New York in 2009 with seats ranging from 19 to 24 inches wide, compared with 18 to 22 inches in the old Yankee Stadium, according to the baseball team. The basic seats on Amtrak’s Acela trains are 21 inches wide. (Older trains have coach seat cushions 20 inches wide.)

But airlines have been making coach seats skinnier, not wider. On widebody jets, airlines have more flexibility to determine how many seats they want in each row. On American Airlines’ existing Boeing 777-200s, for example, the airline has nine seats in a row. On its new 777-300s just being put into service, coach cabins have 10 seats in each row. The width of the fuselage didn’t change—it’s a longer airplane—so the seats shrank from more than 18 inches to about 17 inches. Other airlines are making similar moves with widebody cabins.