Tech Friday: Revisiting Soluto after switching to an SSD

A Tech Friday reminder to consider Soluto if you have a slow booting computer and revisit it after upgrading hardware … especially if you are  for trying to stretch the “use by date” of an aging computer. Everyone I know love a fast booting computer, although I doubt a Windows machine is ever going to be truly fast, perhaps just less slow? 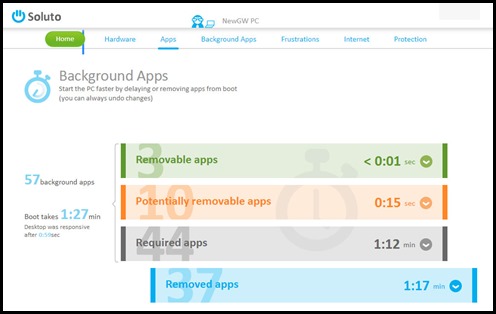 I installed Soluto back in 2010 and can highly recommend using it in order to tweak the boot of your computer and have been revisiting a few settings now that I have the SSD drive in my 7 year old Gateway notebook. I’d love to say that I’ve been 100% satisfied with the cloning process and the new Kingston 240GB SSD, but all did not go as smooth as I had wished. The intended plan was to plug the new drive into my adapter and begin cloning the entire boot partition with EaseUS. What I realized was that the SSD needed to be “initialized” and no matter what I tried, it would not initialize in order to format. Eventually I installed Windows 7 from CD onto the SSD and THEN had a recognizable drive. After switching drives once again I started EaseUS and began the easy cloning process.

After switching drives once again, the boot began with only a few stumbles and drivers that would not operate correctly. Once updated, the Adobe Creative Suite needed to be reinstalled as 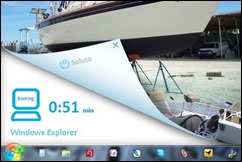 did Intuit’s QuickBooks. I’m still finding a few start up glitches when it comes to recognizing USB and Bluetooth hardware, but after multiple boots and tweaking the old notebook is finally booting with a usable selection of apps in under 2 minutes … but it still will not hibernate or standby correctly and is left confused if items are unplugged between boots. So the theory I’m going with at this moment is to do a full “shutdown” IF I’m moving the computer and only use standby when remaining unchanged (always open to suggestions). Small problems aside, the SSD drive is definitely faster and would have probably been much better IF I would have done a “clean install” of Windows and manually installed all my software again. The boot is now reasonable and apps definitely start quicker, but the goal was merely to extend the life of my current computer and retain the hodgepodge of software that was installed over many years.