I received a letter from Liberty Mutual, my auto insurance company, earlier this month “appreciating my loyalty”  … until I looked at the details – Eligible in 2019 — hmm, must be a mistake?

So … I first called the number on the bottom of the letter and reached the corporate folks so that they could look into this. I mentioned that I’ve been insured with Liberty Mutual since I was 16 years old and have always been with them, assuming that my loyalty would matter IF I ever had an accident. Knock on wood, I’ve been driving for 40 years, have multiple cars, added a wife and raise two children who were covered and learned to drive while on our policy … and none of us has ever costs Liberty Mutual more than a windshield stone chip repair and broken glass window last year “due to vandalism.” Those items over a 40 year span were covered for the most part without question or fanfare … so I was satisfied with the company. 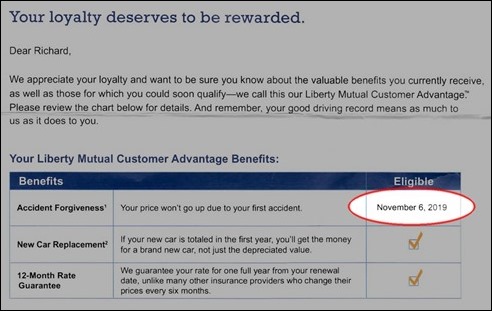 Now … before you think I’m foolish for blindly staying with the same company, I’ve occasionally done comparisons and had Liberty Mutual review our policy and discounts (we also have Home and I have a Life policy) and yes they have usually  been a few dollars higher, but always reasonably close. To me, it was not worth switching thinking “loyalty” made a difference … but now I’m seriously rethinking.

After getting a call back from the underwriting office, they indicated that the broken glass claim triggered the “loss of my accident forgiveness” but my rates didn’t go up yet. What, glass claim when we’re talking accidents costing insurance companies thousands if not 10’s of thousands on medical claims??? After talking with my local agent, it seems that Liberty Mutual changed their policy three years ago and now includes “glass” claims against the accident forgiveness policy … indicated he should have told me about that. (would have been helpful … but then I probably would have switch three years ago?)

So really my long term loyalty didn’t matter and just like banks nowadays, insurance companies aren’t looking at the big picture. That’s too bad, because at one time I would have recommended Liberty Mutual, but now they have irritated me enough to look for new car insurance, but to take my home and life policy elsewhere too. Not only that, but I’m currently frustrated enough to not even recommend them as I have in the past, but also will end up bad-mouthing them to others (and from the way I was treated over this issue, they probably don’t even care!)

My advice for auto insurance nowadays:
Shop around and think carefully about my story before choosing Liberty Mutual as a company to do business with. (yes, written while I’m still fuming … so factor that into the equation.)